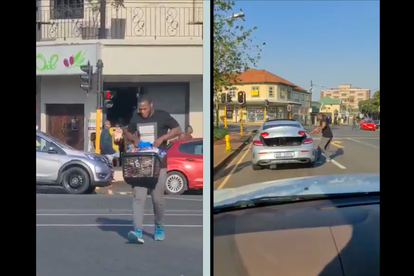 This after he was seen on camera exiting a Woolworths store in Durban, during the July 2021 unrest, carrying a basket of groceries and loading them into the vehicle

ALSO READ: Durban ‘Mercedes looter’ has a change of heart in court

TROUBLES PILE UP FOR MBUSO MOLOI

“Mercedes Looter” is facing charges of public violence and theft, with his trial set to commence on 27 March 2023 at the Durban Magistrate’s Court. He is currently out of R5000 bail.

National Prosecuting Authority (NPA) spokesperson for KwaZulu-Natal, Natasha Ramkisson-Kara, in a statement said the car was seized by the AFU due to it being used in the commission of a crime.

“The car, which was forfeited on the basis that it is an instrumentality of the offences, was valued at approximately R500 000 at the time of the offence.

“Since the vehicle is still under purchase agreement from a bank, the vehicle will be handed over to the bank in due course,” Ramkisson-Kara said.

The “Mercedes Looter” went viral on social media in July 2021 when then-DA leader in eThekwini, Nicole Graham, posted videos on Twitter of him exiting the Woolworths shop in Durban and scurrying to his vehicle.

Graham posted the videos after the “Mercedes Looter” claimed he had found the basket of groceries outside the shop, and did not steal them from inside.

In July this year, the “Mercedes Looter” released a letter where he bemoaned the perceived unfair treatment he has received from the media and police, as compared to other July 2021 unrest looters.

In the letter, Moloi said:

“It still bothers me that my case has been one that has been dragged through the media and on top of that, I had paid a bail amount of R5000 whereas others who had committed much more severe crimes during and after the unrest were given bail ranging from R1500-R2500.

“None of them had to spend seven nights in Westville prison and experience the torture and trauma that my arrest came with.”

“Furthermore, there were others who were caught on video and by police officers with appliances, heavy equipment, money, safes, and weapons and ammunition in their vehicles and none of them had their vehicles taken from them and some even had their cases withdrawn. It goes without question that my case has been one that is personal.”