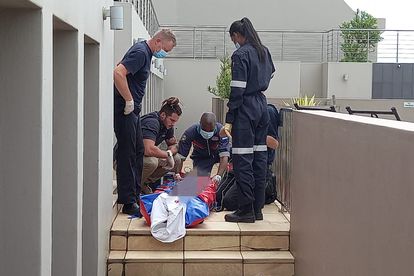 A 24-year-old man suffered critical injuries after falling from the fourth storey of a block of flats in Durban, KwaZulu-Natal on Thursday morning, 7 April.

Netcare911 spokesperson Shawn Herbst said the emergency service responded to an incident at Lagoon Drive in Umhlanga, Durban at approximately 9:30.

“Reports from the scene indicate that the 24-year-old male had fallen from the 4th floor, landing on the concrete below,” said Herbst.

The Netcare911 paramedics found the man in a critical state. The patient was stabilised at the scene before being rushed to a local hospital.

Herbst said the circumstances that led to the patient falling from the apartment are unknown at this stage.

In an unrelated incident, on Friday, 1 April, Netcare911 responded to reports of a suspected drowning in La Lucia.

According to reports, a man stumbled upon a decomposing body of an adult male while walking on the beach. The body was lying face down between flotsam.

“A second body was also found in the shore break, but had washed back out to sea by the strong surf before Lifeguards arrived on the scene,” said Herbst.

The Netcare911 spokesperson said that when the body was flipped over for assessment by paramedics, it was found that a portion of the right upper arm and right chest area were missing “with multiple shark bite marks clearly visible.”

Herbst said although the exact cause of death was yet to be determined it is believed that the deceased was eaten after he had drowned.