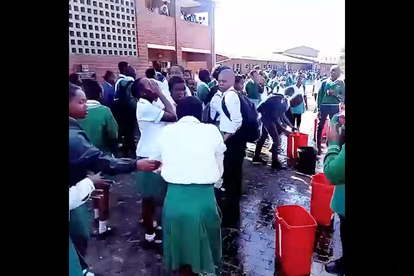 Police had to use teargas to dispersed a group of learners at the Dumisani Makhaye High School in Chatsworth, Durban who were assaulting a suspected cable thief.

The thief was accused of stealing cables at the school and learners reportedly “dealt with him”.

A video showing the aftermath has been circulating on social media. You can watch it here.

The KwaZulu-Natal Department of Education MEC, Kwazi Mshengu commended the learners for standing up to the suspected cable thief.

“Even though it is regrettable that there was disruption in the teaching and learning  as a result of the altercation with intruders, we have always  encouraged communities  to be the first defence  of schools against criminals, hence we commend these learners for standing up to protect the school.”

Police spokesperson, Thenjiswa Ngcobo said they found a group of learners assaulting a man in his thirties.

“The police then dispersed the crowd which was violent. They managed to rescue the man and he was taken to a hospital near the area for medical attention,” Ngcobo said.

Criminals go for anything and everything it seems. Three were spotted stealing cables from a traffic light.

It is not clear when and where the incident happened but it is suspected to be in Johannesburg.

After successfully dismantling it, he leaves the light on what looks like a pavement. All three then walk off with the cables.

Recently, another video of a man who allegedly stole a traffic light and dragged it down the road went viral on social media.

This bizarre event was captured somewhere in Sandton.

While it was unclear what the man intended to do with the traffic light, some social media users assumed that it might be sold for scrap.