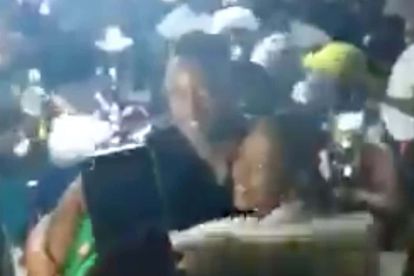 Duduzane Zuma -business and son of former president Jacob Zuma – was seen engulfed by crowds at a night club in KZN on Saturday. Photo: Screenshot

Duduzane Zuma -business and son of former president Jacob Zuma – was seen engulfed by crowds at a night club in KZN on Saturday. Photo: Screenshot

Businessman Duduzane Zuma, the Dubai-based son of Former President Jacob Zuma, has gone on something of a wild jaunt upon his return to South Africa, with the northern Durban township of KwaMashu on Saturday evening the epicentre of his frivolities.

Zuma’s mere presence was enough to evoke a frenzy when he rocked up at the Wiseman carwash and shisanyama venue along with an entourage of bodyguards. Guests flocked to Zuma in droves, causing a commotion that was ultimately controlled in an orderly fashion by his security.

Many on social media also noted a distinct absence of masks worn by patrons or Zuma himself, and social distancing was out the window entirely.

Zuma has been known to cause a scene in the past, often turning up to events unannounced and garnering the attention of those in attendance. He was engulfed by crowds at the venue in KZN, having declined to take his reserved seat in the VIP section in favour of mingling amongst the crowds, who couldn’t wait to get near him.

After his bodyguards got a handle on the situation, everything became fairly pleasant and a flurry of selfies-sans-masks ensued.

It was reported that the DJ conceded that that patrons were no longer interested in his music, but he swung things back in his favour by switching the needle to “Ubaba KaDuduzane”, a track that sent the crowd dashing for the dance floor and giving Zuma the window he needed to make a swift exit.

Love him or hate him, Zuma – and the rest of his family, for that matter – certainly knows how to make an impact.

Heading to the political arena?

Zuma Jnr recently indicated that he could follow in his father’s footsteps and enter into politics once he’s back in South Africa. He said that he will go ‘wherever he is needed’ should he choose to plot a path through government – and that a ‘big announcement’ is imminent.

He recently defended his corruption-accused dad, saying that he is being treated “unconstitutionally by the Zondo Commission on State Capture.

Zuma is also accused of facilitating the looting of critical state entities including the South African Broadcasting Company (SABC) and Eskom, and he was found guilty of culpable homicide after his luxury sports car collided with a taxi on Johannesburg’s M1 in 2014, killing passenger Phumzile Dube.

His presence has certainly been felt now that he’s touched down on South African soil, so it’s worth keeping an eye on him over the next while, one would suspect.