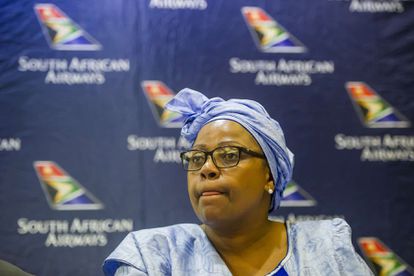 Former chair of South African Airways (SAA). Dudu Myeni has — yet again — failed to appear before the North Gauteng High Court, in Pretoria.

Dudu Myeni: Why she could not make it to court

Dudu Myeni, who’s been brought to book by the Organisation Undoing Tax Abuse (Outa) and the SAA Pilots Association, revealed that she has not been able to appear in court these past two days because she “doesn’t have the financial means to travel from KwaZulu-Natal to attend proceedings at the North Gauteng High Court in Pretoria.”

This makes it the third time since the case was brought to the North Gauteng High Court’s roll, Dudu Myeni has dodged court, citing lack of financial means to make the 520km+ trip to Pretoria.

What is Myeni in trouble for?

Outa and the SAA Pilots Association has been pursuing this case against Dudu Myeni for two years. While the view is to have her declared a delinquent director, Outa’s objective is to obliterate Dudu Myeni’s directorial reputation.

According to court documents, Dudu Myeni is listed as a director at 13 entities. Making her way up the national airline’s corporate ladder, Dudu Myeni went from being a non-executive director to leading as the Board chairperson in a span of six years.

Outa’s argument, in court, is that in her leadership, SAA has lost billions of rand, something in excess of R16-billion. The organisation further indicated that she may have had something to do with the shoddy dealings between the national airline and BnP Capital.

The organisation’s argument is that the R256-million contract with the latter, including a cancellation fee totalling R49.9-million that was payable after the deal was halted (thanks to Outa), was irregular and unlawful.

What will happen with her case now?

The case, however, has stalled for two years, and after Myeni noted that she would, once again, not be pitching up, it seemed that the delays were indefinite.

Much to her disappointment, the North Gauteng High Court has indicated that it will proceed with matters related to Myeni’s case with or without her.

The case has since been postponed until Thursday, 20 October. Myeni has a day to file an affidavit on her move to have the case postponed, to allow for enough time to gather travel funds.

The court, just by the way, has also declined her legal aid assistance since, based on her position in 13 entities, does not fall within the admissible threshold.