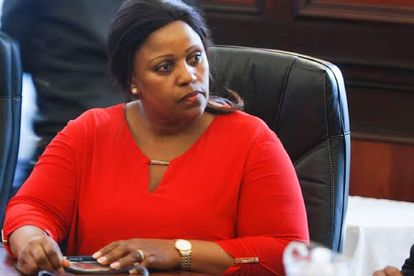 On Thursday, the former South African Airways (SAA) board chairperson, Dudu Myeni failed to appear in court, and her legal team applied for a postponement at the Pretoria High Court, for an application to have her declared a delinquent director.

Court proceedings will commence on 21 October

The presiding Judge Tolmay proposed that the court stand down until 21 October, then it will resume for two weeks, then the matter stands down again from 25 November until 6 December, giving the defence time to prepare for proceedings.

“Please inform your client that if she terminates your services, this matter can proceed without her. Under the circumstance, the matter will stand down until 21 October.”

Myeni has failed to show up in court all week, and during proceedings on Tuesday, Judge Tolamay gave her one day to “find a lawyer” and to file a formal application on Thursday, for the postponement she requests.

Myeni failed to show up for the third time this week

The Organisation Undoing Tax Abuse (OUTA) and the SAA Pilots Association (SAAPA) brought the application in March 2017 and the case was due to be heard from the beginning of this week, they have opposed Myeni’s application for postponement citing she had two years to prepare for this case.

“In these times there are millions of South Africans who cannot afford legal representation. I have seen many individuals appearing themselves who are much less educated than your client.”

The judge further probed if the case is postponed, what guarantee does the court have that Myeni won’t have issues with legal representation again. Tolmay requested that Advocate Buthelezi should officially commit to not withdraw from the case, and requested commitment that Myeni won’t fire the new lawyers.

The judge said a pre-trial meeting would be held next week to understand issues the court will deal with when the matter resumes in October, and if Myeni fires the new advocates, court proceedings will continue without her.

Earlier this week, Myeni communicated to OUTA’s legal team that she couldn’t afford to travel to Pretoria from her home, and attend the case and this message was relayed to the court.

On Thursday, it was declared that the change in her legal team is the cause for her absence.