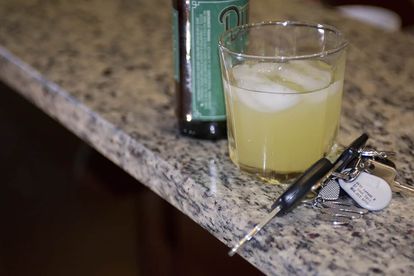 A drunk driver’s attempt to flee did not go as planned. He was beaten with a sjambok while trying to escape to police on Sunday, 23 June.

The 27-year-old Bellville resident was stopped by a Ghost Squad operation when he tried to escape.

According to an Eyewitness report, the man jumped over a spiked wall and received several cuts on his rib cage. He was then beaten by an angry homeowner with a sjambok.

Cape Town Safety and Security Mayoral Committee member JP Smith stated that the man initially would only have faced a drunk driving charge. However, because of his attempt to flee, additional charges had been added.

“What would have been a straight drunk driving case has now turned into a resisting arrest case, but also a trespassing on private property charge, if the owner pursues the matter. I commend the traffic officer who didn’t give up.”

The suspect was then taken to a local day hospital to treat his wounds.

“This is not the first suspect who attempted to make a run for it, but it is certainly one of the first who came off so badly as a result.”

The arrest of the beaten drunk driver was one of 11 arrests that were made during the operation.

As reported by IOL, the highest breathalyser reading was eight times higher than the legal limit at 2.0mg/L.

Another motorist was arrested for being under the influence of narcotics and dealing dagga.

More than 30 drunk drivers were arrested in the Claremont/Wynberg area on Saturday, 22 June.

In total, the police arrested more than 50 drunk drivers from all over Cape Town.

It was also in the early hours of Monday, 24 June that the police had arrested another 32 motorists for drunk driving. Two of them were arrested for possession of drugs. Another suspect was arrested for assault on a police officer. A third suspect was charged with driving a vehicle with fraudulent license plates.

“The City is patrolling the N2 as best as we can, but ultimately, proper fencing is the only real solution to this problem, but also the incidents of attacks by criminals who are able to get onto the highway and either force motorists to a stop by obstructing the roadway, or targeting vehicles that have stopped for whatever reason.”