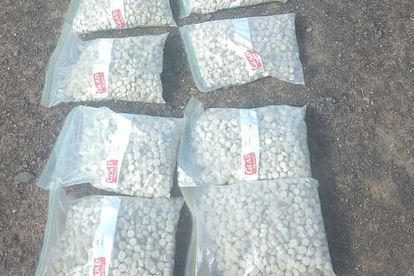 10 000 Mandrax tablets were part of the drug bust worth R 1 million Photo: Supplied

10 000 Mandrax tablets were part of the drug bust worth R 1 million Photo: Supplied

Endeavours to safeguard communities and rid the streets of the Western Cape of drugs yielded positive results.

NARCOTICS WORTH R 1 MILLION SNIFFED OUT

This is after police confiscated more than R1 million worth of drugs in Beaufort West this past weekend during an operation dubbed “Vuthu Hawe”.

“A search ensued when a trained narcotic police dog, Bruno, reacted positively on a box inside the vehicle.”

Spies said the SAPS members opened the box and found ten bags with 10 000 mandrax tablets, with an estimated street value of R500 000-00, inside.

“This discovery led to an intensive search of the vehicle and a further ten boxes of Khat estimated at R570 000-00 were discovered on board.”

He said police confiscated the drugs and arrested two occupants of the vehicle on charges of dealing in drugs.

“The suspects, aged 24 and 37 are expected to appear in the Beaufort West Magistrates’ court this week.”

He said investigators attached to the Western Cape Provincial Detectives Narcotics Section were probing the matter.

Preliminary investigation indicates that the truck was enroute to Cape Town for delivery at the time of the find.

Lieutenant General Thembisile Patekile, the Provincial Commissioner of the Western Cape, praised the K9 members for their dedication and commitment to eradicate drug trafficking into the province.

“Our strategic deployment of specialised units along entry and exit routes of the Western Cape are yielding excellent results.”

Patekile said more resources were directed to the rural areas in a bid to bolster crime fighting efforts.

“Our fleet was also enhanced with the deployment of more high performance vehicles on our highways”.

“These efforts would be maintained as the police strive to rid communities of drugs,”  said Patekile.