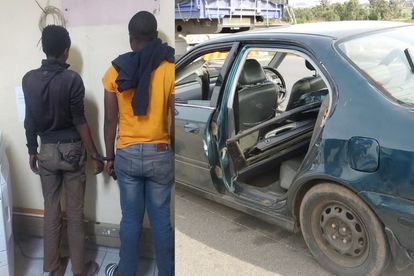 Two drug dealers in Soweto were apprehended in possession of a hijacked vehicle, firearm and for dealing in illegal substances.

He said on Wednesday, 26 October 2022, officers followed up on information received of suspects dealing drugs at a house on Zamukulungisa Street in Emndeni.

MEET AND RUN PERMFORMED BY THE CRIMINALS

He said when the officers introduced themselves to the males, one of the males immediately fled running into the nearby reeds.

“The two males left in the yard were apprehended on the scene, and when they were searched an unlicensed firearm, ammunition and drugs (nyaope and mandrax) were found in their possession.
The officers then conducted an inquiry into the vehicle that was being stripped and they discovered that it was reported hijacked and sought as per the Protea Glen SAPS case,” Fihla explained.

He further explained that the suspects were placed under arrest and detained at Naledi SAPS on multiple charges.

“The drugs, tools used by the suspects, the firearm and ammunition were also booked in at Naledi SAPS. The hijacked motor vehicle was seized and booked in at the SAPS Lenasia pound for verification,” he concluded.