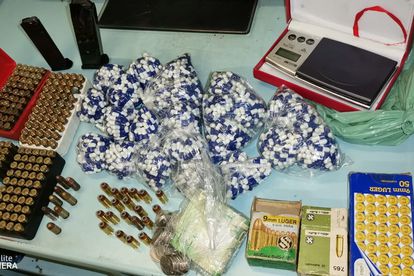 KwaZulu-Natal police have swooped on alleged drug dealers and seized drugs and ammunition in Wentworth, South of Durban, in the latest raid in the province on Tuesday.

SAPS spokesperson, Captain Nqobile Gwala, said that operations by the Provincial Drug and Firearm Unit were on-going across the province.

She said the specialised unit’s latest operation was conducted in the Wentworth area where police had obtained a search warrant for a local property.

“The team went to execute a search warrant in one of the premises on Silvertree Road in Wentworth. The house was identified as (the home of) one of the well-known drug dealer’s in the area,” Gala said.

“The premises were penetrated after it became known that the suspects who were in the outbuilding were attempting to dispose of the evidence.”

She said police officers swooped on the premises and arrested two suspects.

“Two suspects aged 18 and 19 were placed under arrest after they were found to be in possession of plastic packets containing 2401 blue/white capsules of heroin, 233 rounds of ammunition, two magazines and an electronic scale,” Gwala said.

She said the police officers had also seized R350 in cash from the suspects.

“The total value of the drugs and ammunition seized is valued at R74 000. The recovered ammunition will be subjected to ballistic testing to ascertain if it was used during the gang related shootings in and around the Wentworth area,” Gwala said.

Gwala said the two suspects were expected to appear in the Durban Magistrates’ Court to face charges of possession/dealing in drugs and unlawful possession of ammunition.

In a separate incident, Xolani Mfanyana, 21, was sentenced to ten years imprisonment for rape in the Pongola Regional Court this week.

“On 29 June 2020 at 1pm, an eight-year-old girl was visiting her friend’s home when her friend’s uncle called her to another room and asked her to remove her skirt, she declined and he overpowered and raped her,” Gwala said.

“The man was caught by one of his siblings who went and informed the mother of the victim,” Gwala said.

A case of rape was opened at Pongola SAPS for investigation.