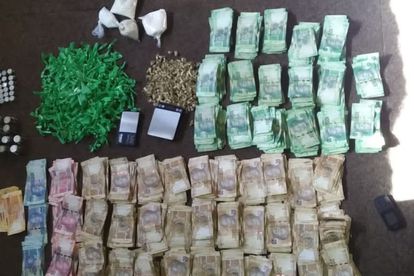 The police in Mpumalanga confiscated drugs with a combined estimated value of approximately R500 000 this week. Five suspects were arrested in two separate incidents on Wednesday and Friday, 21 and 23 July.

According to South African Police Service (SAPS) spokesperson Brigadier Leonard Hlathi, police in Ermelo were alerted to suspicious drug activities being carried out at a house in the area. The suspects allegedly used a silver vehicle for trafficking.

On Friday, the K9 units from Ermelo and Standerton police stations acted on the tip-off and found the house that fit the description. Hlathi said SAPS members found three individuals packaging a suspicious substance, which turned out to be heroin, inside the house.

The suspects were searched and the house was tossed – more than 580 heroin sachets were found along with an undisclosed amount of cash, which suggests that the suspects were involved with drug dealing, according to the police.

“The three suspects, aged between 28 and 38, were immediately arrested and charged accordingly,” said Hlathi. “One of the suspects is a female and the trio is expected to appear before the Ermelo Magistrate’s Court on Monday, 26 July 2021.”

In the other operation, members of the Lydenburg K9 Unit intercepted “suspects who were in a planned mission to traffic bags of dagga” on Wednesday.

Hlathi said the police spotted a bakkie with two occupants and “swooped down.” The vehicle was searched and nine bags with dagga were found. Both the driver and his passenger were immediately arrested.

Pat Mngomezulu, 36, and Michael Molala, 33, appeared in the Mashishing Magistrate’s Court on Thursday, 22 July and were remanded in custody. They are expected back in the same court next Thursday.

“It is high time we claim back the streets from the hands of drug dealers and criminal elements,” said provincial police commissioner Lieutenant General Semakaleng Manamela.

“The call made by our good citizens to deal with drugs in the community has been heard. We are acting with speed to close all the nets for trading in illegal drugs within society. The public should continue to entrust us with valuable information as they can witness the positive results thereof.”