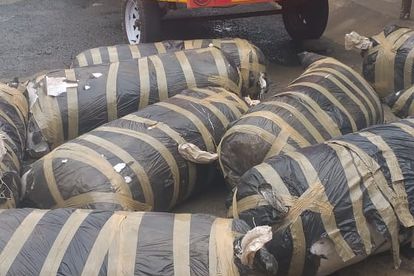 Dundee police officers nabbed a motorist with a massive stash of dagga when they conducted a stop and search operation on Wednesday morning.

KwaZulu-Natal SAPS spokesperson Colonel Thembeka Mbele said the police officers had been conducting the stop and search operation in Karel Landman Street in Dundee at around 10.30am when they arrested the motorist and recovered the stash of dagga. The officers spotted the suspicious vehicle and pulled the motorist over to search it.

“Whilst they were busy with their operation, they spotted a bakkie with a trailer travelling towards the Dannhauser Road,” Mbele said.

“The vehicle was then intercepted and a search was conducted. Upon searching the trailer of the vehicle, police discovered a total of nine 50kg bags containing dagga. The dagga weighed 450 kg and the estimated street value of the recovered dagga is R500 000,” Mbele said.

Mbele said that during the police investigation, officers established the motorist had driven the vehicle from the Eastern Cape province and the the dagga was in the process of being transported to Gauteng.

“A 37-year-old suspect was placed under arrest for dealing in dagga,” Mbele said.

She said the suspect is expected to appear in the Dundee Magistrates’ Court to face the changes on Thursday.

Police officers have been vigilant in arresting motorists for transporting drugs in recent months.

A recent intelligence driven police operation led to the seizure of more than R1 million worth of raw heroin that was headed for delivery to Gauteng in the latest drug bust on the N2 early on Friday morning.

SAPS regional spokesperson, Captain Nqobile Gwala, said police officers from the Provincial Drug and Firearm Unit had embarked on the search for the drugs, after receiving information that the suspect that was going to transport drugs.

“The suspect was coming from Durban and was going to transport drugs to Gauteng,” Gwala said. The team worked tirelessly throughout the night trying to gather all the information regarding the suspect,” she said.

“The police officers mobilised en route towards Jozini and Pongola after holding intense observation during the course of the night,” she said.

Gwala said police officers had spotted the suspect’s vehicle travelling on the N2 freeway in the Pongola policing area.