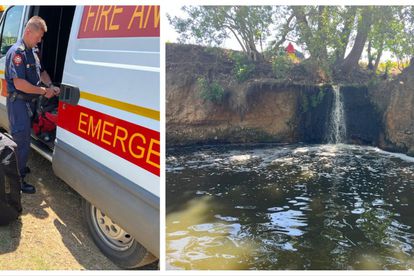 A young man was found dead after he drowned in a river in Pretoria. PHOTO: Tshwane Emergency Services

A young man was found dead after he drowned in a river in Pretoria. PHOTO: Tshwane Emergency Services

The body of a young man who drowned in a river in Atteridgeville, Pretoria was found and recovered on Friday.

It was initially reported that a 25-year-old man fell into the river at around 06h00 on Friday morning.

The man allegedly drowned at a river near Brazzaville hardware on WF Nkomo Street in Atteridgeville.

“Divers from the City of Tshwane Emergency Services Department and the SAPS conducted the search and recovery.”

BODY EVENTUALLY FOUND IN THE AFTERNOON

But by 13:05 on Friday afternoon, the divers finally recovered the body. It turned out to be that of a 21-year-old man instead, said Mabaso.

“Circumstances surrounding the drowning incident remain a subject of an investigation by the South African Police Service.”

Around 1 450 people, mostly males, drown in South Africa each year. This is according to the National Sea Rescue Institute (NSRI). These figures are based on the average drowning cases in the last six years.

Drowning incidents have increased since the relaxing of Covid-19 lockdown restrictions earlier this year. This is also because more people flocked to the beaches, said the NSRI’s executive director for drowning prevention Dr Jill Fortuin-Abrahams.

The rains around the country this year have also contributed to the filling of dams and rivers where people head out to swim, she said.

“It’s a major concert that almost 1 500 people – an enormous number – drown every year in South Africa, especially because most of these deaths are actually preventable.”

The highest number of drowning incidents happen in KwaZulu-Natal, followed by the Eastern Cape and then Gauteng, said Fortuin-Abrahams.

“Most people in South Africa drown, not in the ocean, but in freshwater, be it a swimming pool, a river, a dam, a bath or even a bucket of water,” she said.

“Alcohol impairs one’s judgement and concentration, significantly increasing the chances of drowning and not being able to respond quickly enough to a water emergency,” Jonker said.