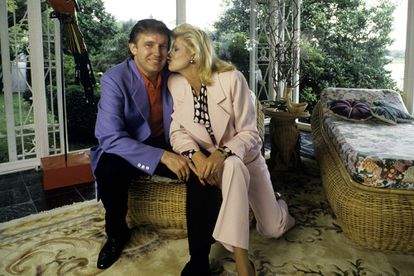 A young Donald Trump and Ivana during their marriage. Photo: People.com

A young Donald Trump and Ivana during their marriage. Photo: People.com

Former United States of America President Donald Trump’s first wife Ivana has passed away at the age of 73 on Thursday, 14 July.

Ivana Trump, was found at the bottom of a set of stairs at her Manhattan apartment after police responded to a person in cardiac arrest, according to ABC News.

Ivana and Donald Trump tied the knot in 1977, but later divorced after bearing three children from the marriage – Eric Trump, Donald Trump Jr and Ivanka Trump.

Much like her former husband, Trump’s first wife was big in business. She was a Czech-American businesswoman, media personality, fashion designer, author and former model.

During her marriage with Trump, Ivana served by his side in the Trump Organization as vice president for interior design.

She also managed the Plaza Hotel, one of the family’s top properties, ABC News recollected.

While her cause of death is subject to an investigation, The Trump family released a statement confirming her death.

“It is with deep sadness that we announce the passing of our beloved mother, Ivana Trump.

Our mother was an incredible woman — a force in business, a world-class athlete, a radiant beauty, and caring mother and friend. Ivana Trump was a survivor. She fled from communism and embraced this country. She taught her children about grit and toughness, compassion and determination. She will be dearly missed by her mother, her three children and ten grandchildren.”

Ivana was married four times, the first being in 1971 with Alfred Winklmayr and her last in 2008 with Rossano Rubicondi.