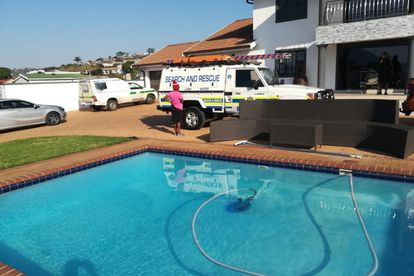 On Monday 24 May, police divers from Durban SAPS Search and Rescue were called out to Inanda for what police have called a drowning incident whereby a domestic worker lost her life.

According to Colonel Thembeka Mbele, a 46-year-old female by the name of Nobuhle Ndlovu, who was a domestic worker, was found floating in a residential swimming pool in the Matabetuleshe area at the property she worked at.

“The body was recovered and handed over to members from Inanda SAPS,” said Mbele.

An inquest docket has also been opened according to Mbele.

A pupil by the name of Avethandwa Nokhangela from Xolani High School in the Eastern Cape, had been taking part in an activity and was on a leadership camp trip at Palm Ridge Holiday Resort, near East London, when she lost her life.

Her body was found after being swept out at sea on Thursday 29 April 2021.

The Department of Basic Education (DBE) has since called for a thorough investigation into the teenage girl’s drowning to ensure that all the facts are established and that those found responsible are held accountable.

“The Department in the province received information from the South African Police Service about the incident after the body of the learner was recovered from one of the Buffalo Metro beaches. The delay by Equal Education in reporting the matter to the Provincial Education Department raises serious concerns”

“The provincial Department has already sent officials to the school to arrange psychosocial support to learners and particularly those who attended the Equal Education event including those left behind at school, educators and the parents of the learner,” Mhlanga further said.