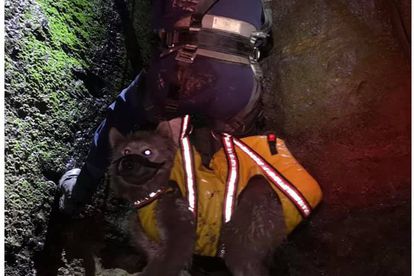 A dog that had fallen down an abandoned mine shaft in Boksburg was recently rescued in a three-hour rescue operation.

THE DOG WAS SHAKEN UP BUT LIKELY NOT HURT

The team rigged all the anchors and rope work to safely carry out the rescue, utilising the main rope and a backup rope to ensure the rescue’s absolute safety.

“An Officer from SAPS was lowered down into the abandoned mineshaft. After reaching the bottom approximately 15 meters down, he started putting a muzzle on the dog.

“The dog was understandably very shaken up but unhurt. After numerous attempts to muzzle the dog, a member from SARZA also went down the shaft to assist in securing the aggressive dog.”

It furthermore said together, and they managed to get the dog muzzled and safely secured into the K9 full-body harness.

“The team then hauled the SAPS officer and the dog out of the shaft. Shortly after that, The SARZA member was hauled up too.”

The dog was handed over to SPCA, and the team was debriefed before heading home.

“Both SAPS K9 SAR and SARZA worked well together in order to save this dog’s life.

“We were glad to be able to assist in this great outcome to an unfortunate situation.

“Special thanks also to the members of the Local CPF who assisted us in the rescue.”