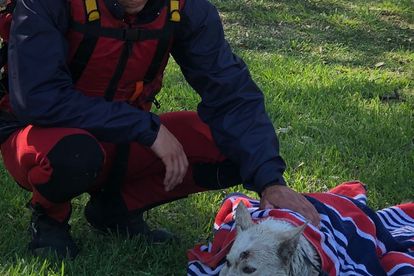 A poor dog was found in the middle of the Hartebeespoort Dam, the National Sea Rescue Institute (NSRI) said.

“At 14h20, Friday, 17 September, NSRI Hartbeespoort Dam duty crew were activated following multiple eye-witness reports of a dog in the middle of Hartbeespoort Dam and appearing to be in difficulty swimming in the direction from Mariners Village, Kosmos, towards Pecanwood.”

“An unidentified bystander on a jet-ski was found on the scene attempting to assist.

“The dog was assisted to shore where bystanders, Jaco and Anne, from Kosmos, assisted to warm the dog in blankets and the dog was rehydrated.”

He furthermore said the dog was taken to the local animal sanctuary HAWS by Anne, who was assisting on the scene, and the dog is recovering.

Attempts are being made to trace the owners.

“NSRI commend everyone who assisted in this heartwarming incident.”

Last month a beautiful black labrador named Sushi was recently rescued after being trapped in an underground drainpipe in Fairlands, Johannesburg.