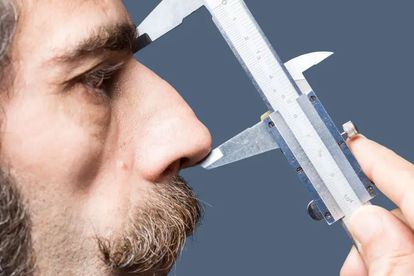 Do men with big noses have big penises? Photo: selimaksan/iStock

Do men with big noses have big penises? Photo: selimaksan/iStock

The nose length was considered an indicator of penis size in ancient Roman society. This is according to a study.

DO YOU THINK MEN WITH BIG NOSES HAVE BIG PENISES?

So does this mean men with big noses have big penises?

The study was published in 1971 but could not be proven scientifically until last year when a team of Japanese researchers claimed in their study that men having big noses are likely to have long penises.

According to a report by Interesting engineering, researchers from the Kyoto Prefectural University of Medicine examined 126 dead men aged between 30 to 50 years for three days after their death.

The report furthermore stated that since a dead man can not have an erection, the researchers manually elongated the phalli (penises) of the corpses and noted the maximum length of each penis, also called the stretched penile length (SPL).

“The researchers then compared the SPL of each corpse to its other body measurements, such as height, weight, and size of different body parts (including limbs and nose). The results of this bizarre experiment were shocking.”

WHAT ARE THE RESULT OF THIS EXPERIMENT?

“Our study also suggests that SPL and nose size can be used as indicators independent of age and postnatal body size.”

The researchers furthermore noted in their paper that the most highly correlated factor with stretched penile length was the flaccid penile length. The next highest correlation was nose size.

THE STUDY COULD PLAY A CRUCIAL ROLE IN THE FUTURE

These researchers reportedly believe that in the future, their study could play a crucial role in explaining the growth pattern of male genitals, their relation with facial features, and evaluating male sex hormone levels in babies before birth.

ALSO READ: Country with the BIGGEST penises in the world revealed