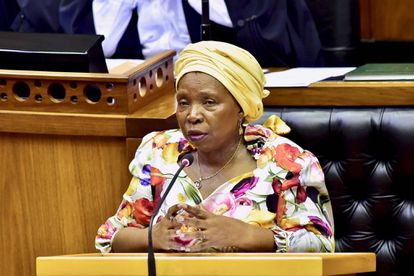 South Africans could be back at the polls ‘by the end of next month’ after ConCourt sensationally ruled that there should be no delays in hosting the Local Elections. The decision will be a body blow for the likes of the ANC and the EFF, who vehemently backed a postponement due to COVID-19 fears. However, Nkosazana Dlamini-Zuma still has a part to play.

When will the 2021 Local Elections take place?

The COGTA Minister became something of a pantomime villain last year, following a series of shock announcements that became her remit as the leader of the NCCC. However, NDZ doesn’t have much room for surprise this time.

That’s because the ConCourt ruling only allows Dlamini-Zuma to choose a date of the Local Elections ‘within a certain timeframe’. The IEC must now decide if a voter registration weekend can be held between now and 27 October – the earliest possible date for when the vote can be held this year (the latest is 1 November).

Minister Dlamini-Zuma ‘will have the final say’

The Commission has to notify Dlamini-Zuma of their final determination. If a voter registration weekend can take place within the next seven to eight weeks, it falls to the minister to ‘issue a proclamation’ on when the Local Elections should get underway – complete with amendments to the existing timetables.

However, if a voter registration weekend CANNOT be held between now and the latest possible voting date, Dlamini-Zuma will still be asked to announce when exactly the polls will open – and it’ll be up to her to lay down a declaration that encourages eligible voters to rather register at their nearest municipal office.

Whatever happens in the next few weeks, NDZ again finds herself as the bearer of bad news – at least for those who wanted the Local Elections pushed back to 2022. Both the ANC and EFF have failed with bids to halt the process, and with just weeks left to prepare, both organisations may find themselves off-guard with this announcement.