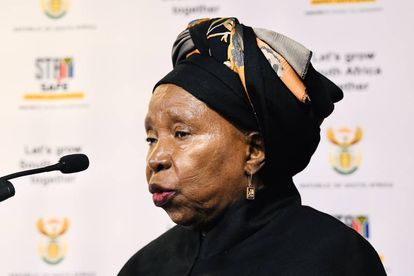 Cooperative Governance and Traditional Affairs Minister, Dr Nkosazana Dlamini Zuma leads a media briefing following the address to the nation by President Cyril Ramaphosa on Saturday, 15 August 2020, on progress in the national effort to contain the Covid-19 pandemic and level 2 regulations [Photo: GCIS]

Cooperative Governance and Traditional Affairs Minister, Dr Nkosazana Dlamini Zuma leads a media briefing following the address to the nation by President Cyril Ramaphosa on Saturday, 15 August 2020, on progress in the national effort to contain the Covid-19 pandemic and level 2 regulations [Photo: GCIS]

Organisations AfriForum and Solidarity are proceeding with the preparation of court papers against Cogta Minister Nkosazana Dlamini-Zuma over the government’s implementation plan for COVID-19 vaccines.

This comes after the minister apparently failed to respond to a letter of demand that was issued to her by the two organisations on 13 January.

According to AfriForum, Dlamini-Zuma had more than enough time to provide answers to the two organisations regarding the government’s vaccine implementation plan and this leaves them with no choice but to go to court.

Campaign Officer for Strategy and Content at AfriForum Ernst van Zyl said the government’s non-disclosure of information is further proof why it cannot be trusted with the purchasing and distribution of COVID-19 vaccines.

“A government incapable of demonstrating basic transparency on matters of such a serious nature cannot be given the benefit of the doubt,” said Van Zyl.

According to Solidarity, the current implementation plan comes down to nationalising the distribution and administration of the COVID-19 vaccine.

“There is no clarity on the roll-out of the government’s so-called vaccine plan at the moment. It is also not clear why Drs Dlamini-Zuma and Mkhize have the power to prohibit anyone but the state to procure vaccines,” said head of the Solidarity Research Institute Connie Mulder.

‘FORCED’ TO TAKE DLAMINI-ZUMA TO COURT

Mulder said it’s a shame that the ministers, including Dlamini-Zuma, did not see fit to provide answers about the roll-out of the vaccine.

“That is why we are now forced to take the case to court. In view of the mistrust in the government and their handling of the vaccine issue, exceptional transparency is now of utmost importance,” said Mulder.

“It is absolute wishful thinking to try and tackle the vaccination programme alone. The government is clearly determined to fail, and we cannot stop that from happening. However, what we must do, is to stop them from preventing others from succeeding,” Mulder added.

Shortly after Western Cape Premier Alan Winde said the province would try to procure its own vaccines, the ANC in the Western Cape released a statement saying that he should focus on his job and leave the vaccine rollout to the health professionals and essentially, national government.

“I call on the Premier to leave the vaccination effort to the health professionals currently dealing with it. Don’t feel the need to appease DA leader John Steenhuisen: just do your job. You are much more effective when you ignore the DA’s petty politics.”

The South African reached out to the spokesperson for Dlamini-Zuma Mlungisi Mtshali, for comment regarding Afriforum and Solidarity’s actions, however, there was no response at the time of publication.