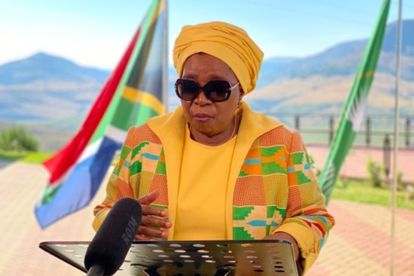 Minister Nkosazana Dlamini-Zuma is to bring support to those affected by floods in Jagersfontein. PHOTO: Twitter/@DlaminiZuma

Minister Nkosazana Dlamini-Zuma is to bring support to those affected by floods in Jagersfontein. PHOTO: Twitter/@DlaminiZuma

Cooperative Governance and Traditional Affairs (Cogta) Minister Nkosazana Dlamini-Zuma has activated a National Disaster Management Centre in Jagersfontein. This is to bring support to the victims of the devastating floods on Sunday.

Dlamini-Zuma is activating the centre to coordinate with the Provincial Disaster Management Centre. The centre is also to work with other stakeholders to ensure that required assistance is provided where needed.

This comes after an abandoned local mine dam burst open at around 06:00, leading to floodings and mudslides that damaged infrastructure and swept away homes.

The floods and mudslides extensively damaged the community of Charlesville in Jagersfontein, leaving a negative impact on the community.

Some people are displaced, others lost property, whilst others are reported injured and missing, said Cogta spokesperson Lungi Mtshali.

Three people have since died and cattle in nearby farms were also affected.

“The National Disaster Management Centre has deployed staff members to the affected areas to assess the damage and impact and to provide direct operational support.”

Dlamini-Zuma urges the deployed teams to do everything that is required to reduce the negative impact on the affected communities.

After the news broke of the tragic and shocking flooding, a multidisciplinary team immediately responded.

The team consisted of the South African Police Service, emergency medical services, health, disaster management, and the department of social development. The search and rescue personnel and engineers from the mine also responded. They all responded quickly to search, rescue, bring immediate relief and start to stabilise operations, said Mtshali.

“The reports received thus far are that the flow of the water has ceased and the immediate threat is being stabilised. The injured persons have been provided with on-scene emergency services and [were]… transported to local hospitals.”

Assessments are currently underway to identify and account for all residents of the affected areas, he said.

Dlamini-Zuma expressed appreciation for the role played by the Free State provincial leadership, led by Premier Sisi Ntombela. This provided support and assistance to the affected communities.

“The Minister also urged communities to remain calm and urged those unaffected people in Jagersfontein who are able to lend a hand to those negatively affected by the incident to do so,” Mtshali said.