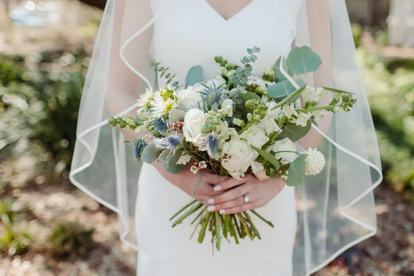 Talk about a wedding to remember! “In sickness and in health” – this part of a groom’s vows were put to the test when his new bride was struck by a sudden bout of sickness that caused her to swoon into his arms during their ceremony.

Hollee Lynnea-Kolenda Darnell, a 22-year-old American woman from the city of Minneapolis, Minnesota, recently got married to new husband Jackson, at a ceremony in Florida.

“I kept trying to tell my husband I didn’t feel good and he thought I was joking,” Darnell said on TikTok. In the clip, which has been viewed a whopping 5.8 million times, she can be seen holding onto Jackson’s hands, just as their pastor begins officiating their ceremony under an outdoor gazebo.

“Are you OK?,” Jackson asked after he and the pastor caught Darnell’s fall and began fanning her face. In response, the young bride shakes her head (to say no) and stumbles over to the edge of the gazebo, and vomits over the side.

You can watch the TikTok video here.

In a follow-up video on TikTok, Hollee Lynnea-Kolenda Darnell explained that she had been super-hydrated on that day and hadn’t eaten or drunk anything. To top it off is the fact that the heat in Florida was completely off the charts. Darnell also admitted that she is prone to passing out due to low blood pressure and iron, as per her doctor.

“After I passed out … My sister had a fan on my baby nephew, so she came over to me to put that fan on me, and as she was holding my nephew he starts pooping. And the poop goes down her arm and onto my dress.”