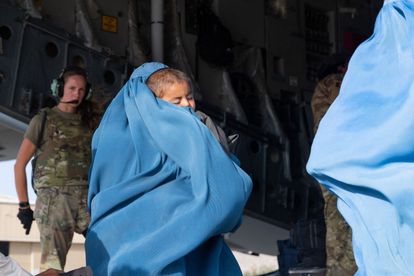 South Africa’s Department of International Relations and Cooperation (DIRCO) has said the country opted to reject a request to take in refugees from Afghanistan, who had sought refuge in Pakistan, in the wake of the Taliban takeover.

Hundreds of thousands of Afghans have fled the country, out of fear of Taliban rule. The militant group swept into the capital Kabul earlier in August, seizing control of the government and forcing President Ashraf Ghani to flee.

A number of countries have agreed to accommodate Afghan citizens, however DIRCO says South Africa cannot follow suit, citing its own immigration situation.

“The South African Government notes the overtures made to the Country to consider receiving a number of Afghanistan refugees who have sought refuge in Pakistan. The request is that they be accommodated in South Africa en-route to their final destinations,” said DIRCO spokesperson Clayson Monyela.

“The South African Government is unfortunately not in a position to accommodate such a request. South Africa is already home to a substantial number of refugees and is seized with addressing their needs. Most of them already benefit from the Social Assistance and free medical health programmes offered by our country.”

There are already several million refugees in South Africa, most of them from African countries.

“In terms of international law, the well being of the refugees is best served by remaining in the first country arrival – Pakistan – pending their final destinations,” Monyela added.

The Taliban has assured 100 countries that it will continue to allow foreigners and Afghans with foreign travel papers to leave the country “in a safe and orderly manner.”

“We have received assurances from the Taliban that all foreign nationals and any Afghan citizen with travel authorization from our countries will be allowed to proceed in a safe and orderly manner to points of departure and travel outside the country,” a statement from the 100-nation group said.