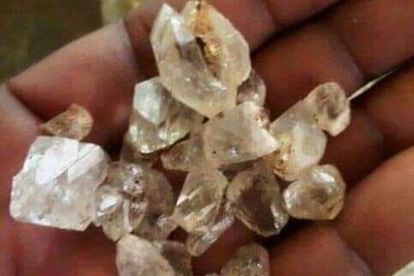 People in a rural area near Ladysmith believe they have struck rich with the discovery of diamonds.

People in a rural area near Ladysmith believe they have struck rich with the discovery of diamonds.

The jury is still out on whether the stones discovered in KwaHlathi near Ladysmith are in fact diamonds or possibly just common-or-garden crystals found close to the surface of the ground.

This is the latest feedback from a high-level government delegation that visited the village on Tuesday. Many residents believe that have struck it rich and that they will be a ‘poor boy’ no more with their lucky find at the weekend, ironically, right near the hometown of Ladysmith Black Mambazo, who collaborated with Paul Simon on the hit pop sing “Diamonds on the Soles of her Shoes” back in the mid-1980s.

KwaZulu-Natal MEC for Economic Development, Tourism and Environmental Affairs (EDTEA), Ravi Pillay, the Mayor of Alfred Duma Local Municipality, Vincent Madlala, officials from the Department of Mineral Resources and Energy (MRE), traditional leader inkosi Sphiwe Kunene, members of the SAPS and representatives of other statutory and regulatory bodies were among those who visited KwaHlathi.

EDTEA and MRE said in a joint statement issued on Tuesday night that the visit formed part of the government’s fact-finding mission following the discovery of stones which are purported to be diamonds.

“A team of experts from the DMRE – comprised officials from the South African Diamonds and Precious Metals Regulator, the Council for Geoscience and Mintek – conducted an inspection of the site,” the departments said in the statement.

“Following preliminary analysis of the stones on site, detailed analysis will be conducted on samples made available to the team. Conclusive results are expected within a period not exceeding month. The Department of Mineral Resources and Energy will make an announcement as soon as the analyses are concluded and results are available,” EDTEA and MRE said.

“As expected, the discovery of the stones has led to throngs of people flocking into the area. We are concerned about the threat that this poses to the health and safety of persons involved. It is also concerning that there is no adherence to Covid-19 protocols. Therefore, we appeal to members of the public not to go to the area. We further appeal to those at the site to vacate until all processes are concluded. As the investigations are underway, the committee urges for cooperation and patience,” the departments said.

South Africa is a signatory of the UN global diamond governance structure known as the Kimberly Process Certification Scheme. This structure was established to prevent the proliferation of conflict diamonds into the global trade of natural diamonds.

“The processes to be followed in the KwaHlathi matter will be in keeping with KPCS minimum requirements. All relevant structures and government departments will remain on the ground to monitor the situation,” EDTEA AND MRE said.