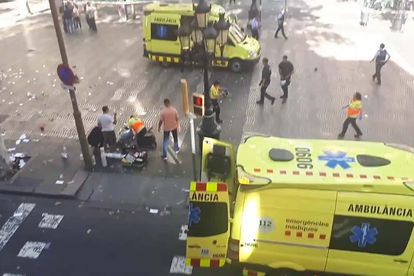 This story will be updated should new information become available…last update at 20:21 SAST.

Thirteen people have been killed, and at least 50 have been injured after a van drove into a crowd of people in Barcelona. Catalonia’s interior minister Joaquim Forn confirmed the death toll.

Police confirmed that a suspect has been arrested.

The incident took place on Thursday afternoon in the Las Ramblas district, a popular area with tourists.

Local media in Spain reported at least 13 people had died, but Catalan police confirmed just one death. Police said 32 people were injured, ten of them in critical condition.

Police confirmed that they were treating the incident as a terror attack.

Television pictures showed a crashed van stopped on top of a Joan Míro mosaic halfway down Las Ramblas. It reportedly entered the wide Boulevard where it meets the Plaça de Catalunya, then drove towards the port area, meaning it would have covered more than 500 metres.

And soon after the incident, armed police were on the streets.

It was further reported by local media that at least one armed suspect was is holed up in a Turkish restaurant, but police later dismissed these reports.

Not long after the incident, a video surfaced on Twitter showing armed police strolling the streets.

Graphic videos of the crash victims have been shared on social media.

To combat this, residents of Barcelona, and other social media users, are- flooding the #barcelona hashtag with images of cute kittens.

The Guardian reports that this tactic has been used before.

It was a tactic employed by Belgian social media users in 2015. Police there asked citizens not to tweet about armed counter-terror operations being carried out around the country, and told people to stay indoors and not go near windows. Belgians reacted by using the #BrusselsLockdown hashtag to share pictures of their pets and make jokes.

The video below appears to show people running away from cafes and restaurants on Las Ramblas.