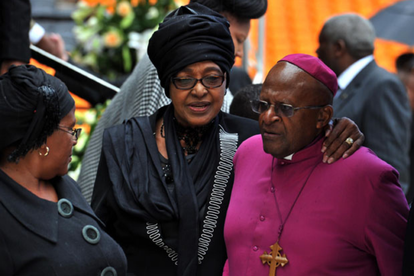 If you spend long enough in the limelight it’s only a matter of time until you do something controversial. It seems as if even Archbishop Desmond Tutu isn’t immune to public scrutiny.

The religious leader passed away on Boxing Day and his death has sparked debate over his drama relating to another South African legend.

‘Winnie’ trended on social media as citizens raised their views over one of Tutu’s more questionable moves.

Many feel that Tutu’s insistence that Winnie Madikizela-Mandela should apologise for the murder of Stompie Seipei was ‘unforgivable’.

The Truth and Reconciliation Commission had heard allegations of how the late struggle icon and the Mandela United Football Club had carried out human-rights atrocities.

Desmond Tutu had made an emotional plea before the inquiry in 1997. He had begged Winnie Mandela to apologise.

The details behind the controversy

The struggle veteran had, in response, ended up apologising to Seipei’s family. Seipei was a teenage activist who had been suspected of being a police informant.

In line with this, Seipei had been kidnapped by members of Mandela United and murdered by one of the members. The member had, in turn, claimed he had acted on Mandela’s orders.

Ultimately, this resulted in her being convicted of the kidnapping and of being an accessory to the assault. However, the six year sentence was reduced to a fine and a two year suspended sentence on appeal.

Nevertheless, it seems as if the moment has managed to linger long enough to mar the religious leader’s legacy.

When Mandela herself passed away, Tutu had paid tribute to her legacy, commenting that she had inspired him.

“Her courageous defiance was deeply inspirational to me, and to generations of activists. I am humbled to have known her. I admired and respected her. May she rest in peace and rise in glory.”