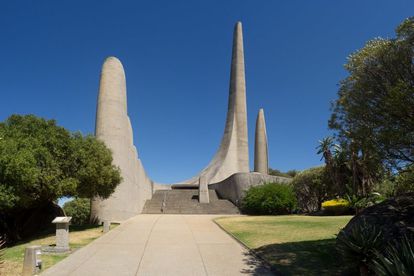 A number of high-profile Afrikaans singers and the DA in the Western Cape protested to preserve the Afrikaans on the Afrikaans language monument. Photo: Stephen Harper / Flickr

A number of high-profile Afrikaans singers and the DA in the Western Cape protested to preserve the Afrikaans on the Afrikaans language monument. Photo: Stephen Harper / Flickr

A number of high-profile Afrikaans singers and the Democratic Alliance (DA) in the Western Cape will be protesting and performing in Paarl.

DA and singers to protest on Saturday

The demonstration, scheduled for Saturday, 28 May, will see the groups demanding the continued preservation of the Afrikaans Language Monument. DA Provincial leader Tertuis Simmers is expected to lead the march. The march will be followed by a protest concert at Zomerlust.

At the concert, more DA members and artists will address Afrikaan’s supporters on the matter. The news of the march follows a recent motion for the word ‘Afrikaans’ to be removed from the monument, reports SABC News.

ANC ‘want to REMOVE the Afrikaans’ from an Afrikaans-language moment

The ANC has encountered another stinging rebuke after they were accused of trying to target the Afrikaans language once more. Fresh from conceding defeat about the native tongue’s indigenous status this week, it seems we’ve got round two on the way.

The Afrikaans Language Monument (or Afrikaans Taalmonument) in Paarl is, according to several sources, set to undergo a name change. Proposals from the Department of Sports, Art and Culture allegedly want to ‘remove the Afrikaans language’ from the structure.

In what would be a highly controversial move, documents seen by politicians and trade unions alike confirm that Minister Nathi Mthethwa is mulling the idea of renaming the statue ‘on the grounds of inclusivity’. Needless to say, these details have irked the DA. Read the full story here.

ANC vs language: Round two underway

Trade union Solidariteit has also issued a statement, accusing ANC ministers of trying to ‘steal the identity of a community’. One representative of the group has made a passionate defence of the language, arguing that no name change can alter history.