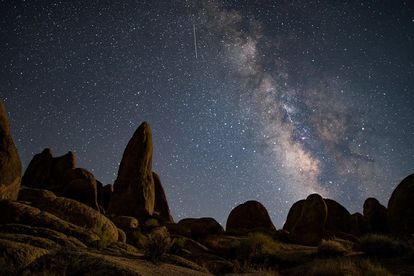 The Southern Delta Aquariids meteor shower, while not being the most exciting meteor shower of the year, is visible from mid-July to mid-August every year. This year, it peaks on 30 July.

The Delta Aquariid meteors appear to radiate out of the constellation Aquarius, which will rise in the southeastern sky. Even though it peaks on 30 July, it will still be somewhat visible up to 23 August.

If the weather permits, you could see up to 20 to 25 visible meteors per hour. However, don’t despair if you miss out on the Delta Aquariid meteor shower, the best is still to come.

The next full moon will be on 15 August, and just after that follows the Perseids meteor shower. It will be the most spectacular meteor shower this year, and will peak between 12 August and 13 August.

What happens during a meteor shower

Earth then passes through that debris field when we cross paths with the comet’s orbit on our journey around the sun. Fear not, meteoroids are usually small, no bigger than a boulder.

How to view the Delta Aquariids

The most important aspect of viewing a meteor shower is to plan ahead. Mark August in your diary for the Perseids meteor shower, followed by the Orionids in October, the Leonids in November and the Geminids in December.

NASA explains that you won’t need a telescope, a pair of binoculars or even a high mountain to see a meteor shower. You can either camp out in the wild away from the city lights, or enjoy it from the comfort of your backyard.

Simply find an area away from the city lights, lie flat and look up in order to see as much of the sky as possible. If possible, take a blanket, chair or sleeping bag to keep you comfy.

Looking halfway between the horizon and the zenith, and 45 degrees from the constellation of Aquarius will improve your chances of viewing the Delta Aquariids.