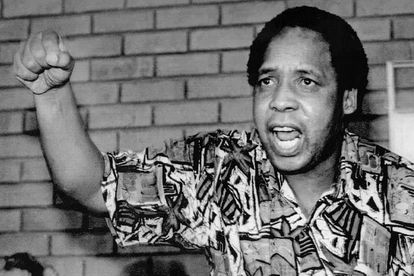 Easter is a time to celebrate the family and friends who have stuck with you over the years. However, the annual long weekend has been marked by some pretty significant deaths in recent times.

We’re looking back at some of the more tragic stories of Easter holidays gone by. Famous musicians, memorable actors and homegrown heroes have all died on this holy weekend, but sadly, none of them were to resurrect.

People who have died on an Easter weekend:

The multi-talented Swedish actress received three Oscar nominations on the way to becoming one of the pioneering stars of early cinema. She lead the movie industry into the “talkie” era and was widely regarded as one of the most beautiful women of her time.

The British comedian – yes, the one who cemented his legacy with silly chase sequences and comical music – is perhaps one of the most famous funnymen to have ever existed. Whether you know his name or not, you’ve certainly heard this:

Our very own hero of the struggle, Chris Hani, was assassinated by a far-right Polish immigrant when he was just 50 years old. Frustration still dominates the discourse regarding Hani, as South Africa was robbed of a visionary.

Ives was the last surviving soldier from the Boer Wars. It’s perhaps fitting he died within 48 hours of another legendary fighter in Hani.

The Nirvana frontman took his own life on the Easter Monday of 1994. Cobain was a colossus on the music scene, and he lead the grunge movement that permanently changed the face of rock music. However, Kurt never sought fame, and aged 27, he committed suicide.

Music was to lose yet another iconic figure in 2001. He lead his band to the heights of punk success, largely thanks to their tub-thumping anthem “Hey Ho, Let’s Go“. The lead singer of The Ramones passed away due to complications with lymphoma.

The Queen’s mother was one of the most warmly-received figures in the whole royal family. She was best known for her eloquence, kind heart and even her ability to make the entire room laugh. Aged 101, her death was felt across the whole world.

The songstress had a voice that could make a wolverine purr left an indelible mark on the music industry. Stone cold classics like Feelin’ Good and I Put A Spell On You took soul and RnB to new, perhaps unparalleled heights.

It’s a case of “what might have been” for Karen Muir. She won 22 South African Championships and three US National Championships, but never competed at an Olympics due to South Africa’s sporting boycott under the apartheid regime.

Muir also became the youngest person to hold a world record in any sport, when she blazed a trail in the 110m backstroke aged just 12.