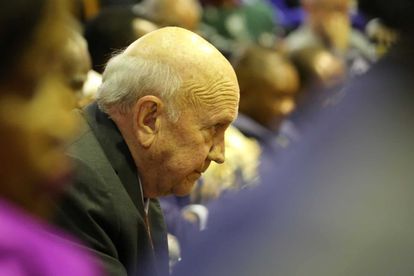 After the fake #DeKlerkMemorialService went viral on Twitter a few weeks ago, the actual state FW de Klerk memorial service is set to take place this weekend. Unlike the one on Twitter, this one is likely to be without jokes and people singing their favourite Afrikaans songs. In fact, President Cyril Ramaphosa will address the state organised event on Sunday.

When is the FW de Klerk memorial service?

After the last apartheid president’s death on the 11th of November, it became clear that a state funeral would not be held. Instead, the family opted for a small private event. Government showed no signs of holding a memorial service for de Klerk either. But it’s clear things have now changed. This week, the presidency revealed that a state memorial service would be held for de Klerk in Cape Town.

President Cyril Ramaphosa will deliver the eulogy at the de Klerk memorial service in Cape Town on Sunday. The event is being held at 10:30AM at the Groote Kerk in the Cape Town civic centre.

“FW de Klerk served as Deputy President under President Nelson Mandela from 1994 to 1996, having played a vital role in South Africa’s transition to democracy in the 1990s.”

Are protests expected at the state memorial service?

With de Klerk still angering millions of South Africans for his role in apartheid, police are on high alert for potential protests. The National Joint Operational and Intelligence Structure says it has been meeting regularly to prepare for the event. It says it’s ready to act should there be any trouble.