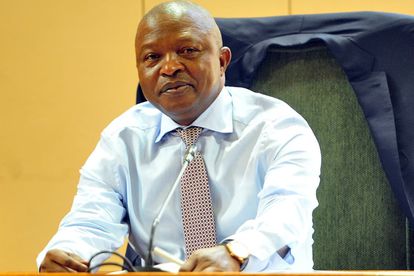 Deputy President David Mabuza convenes a Special Cabinet Committee on Eskom. The Committee was established by President Cyril Ramaphosa to deal with challenges of electricity supply disruptions and its impact on the country. The meeting was held in Cape Town, Parliament. Photos: GCIS

Deputy President David Mabuza convenes a Special Cabinet Committee on Eskom. The Committee was established by President Cyril Ramaphosa to deal with challenges of electricity supply disruptions and its impact on the country. The meeting was held in Cape Town, Parliament. Photos: GCIS

In one of the craziest stories since Elvis the Coup plotter, a woman has been arrested for lying about Deputy President DD Mabuza being behind a murder conspiracy.

In a statement released by the Hawks, they said a 31-year-old woman was arrested for alleged ‘fraud, forgery, and defeating the ends of justice’. This comes after the suspect accused Deputy President DD Mabuza in an alleged conspiracy to murder a Mpumalanga businessman.

The deponent – pretending to be the niece of Mabuza – was arrested on Wednesday. She is expected to appear in the Nelspruit Magistrate’s Court on 15 January 2020.

An investigation was launched into the matter by the Hawks in November 2018, when the suspect accused Deputy President Mabuza of conspiracy to murder in an affidavit, allegedly taking place in the police precinct of Sandton, where the original criminal docket was opened.

As the original statement was not recorded by the police at the time, an investigation was launched into the case. This was made difficult as the identity of the suspect was never disclosed in her affidavit; furthered by the realisation Mabuza was not in the country during the time of the alleged offense. This lead to the realisation the information provided, and the suspect’s relationship with Deputy President Mabuza, may be false.

According to the statement, the team tasked with investigation followed all leads available, based on the information found in the affidavit submitted. The investigators were able to identify and monitor the suspect, while they searched for the person who’s details she impersonated on the affidavit.

An identification parade was held on 14 March, and the suspect was identified by the officer to whom she submitted the report. The suspect is currently in custody, after making a confession to the magistrate.

The motive for the fabrication of the false affidavit has not been determined. The Hawks noted the following:

“The investigation has also ascertained that huge amounts of money were paid to the deponent, co-incidentally, after deposing of the affidavit.”

The National Head of the Directorate for Priority Crime Investigations, Lieutenant General Godfrey Lebeya, commended the team for their hard work and focus during the investigation. Lebeya also called upon the public to step forward, should they possess information, to aid the police in their investigation.

The investigation is currently ongoing, as the motive to falsely accuse Mabuza has not currently been identified.

How much money exchanged hands?

The quote above is all the information the Hawks released. “Huge amounts”… How much money would you turn over your fake uncle for?