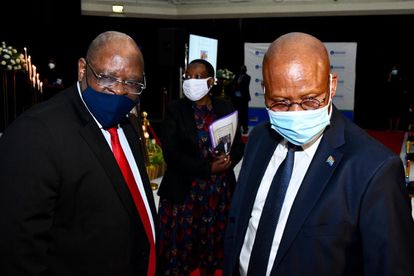 Deputy Chief Justice (DCJ) Raymond Zondo has paid tribute to the now former Chief Justice Mogoeng Mogoeng, who ended a 12-year term in the Constitutional Court on Monday, 11 October. Zondo had nothing but acclamation for his ex-colleague, hailing him for leading the country’s judiciary and being an anti-corruption champion.

“Under his stewardship the Judiciary, as an Arm of State, has taken strides to vigorously protect its independence and prove itself as the guardian of the Constitution. Through his outstanding leadership Chief Justice Mogoeng Mogoeng greatly enhanced the standing of the Judiciary in our country,” Zondo said.

Mogoeng was appointed to the Constitutional Court by then President Jacob Zuma in 2009, along with Justices Sisi Khampepe, Johan Froneman and Chris Jaftha. Then the Judicial Services Commission (JSC) recommended Mogoeng for Chief Justice in 2011 and he was officially confirmed by Zuma on 11 September that same year.

DCJ Raymond Zondo says Mogoeng Mogoeng boasts a number of accomplishments since being appointed in the highest court in the land and that during his time, has often spoken strongly against corruption in both the public and the private sector.

Zondo says Mogoeng started his tenure at a time when many people doubted that he was the right person for the post. However, Zondo says he was soon able to win his critics over.

“On behalf of my Colleagues in the Constitutional Court and on behalf of the entire Judiciary in this country I take this opportunity to thank Chief Justice Mogoeng Mogoeng for his excellent service to the Judiciary and to the people of South Africa. He served this country as Chief Justice during some of the most difficult times in our constitutional democracy and was able to lead the Judiciary with courage, integrity and wisdom”

“We thank the Chief Justice for leading the Judiciary with distinction, for his humility and for his integrity. We thank him for his outstanding service to the people of this country. We thank his wife and family for giving him strong support during his term of office and for allowing him to devote as much time as he did to the service of the nation,” Zondo said.