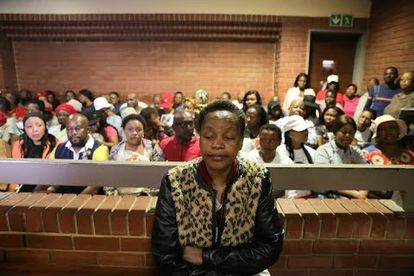 Benoni childminder, Manana Celina Tsabane(39) has been sentenced to 30 years for the murder of one-year-old toddler Langelihle Mnguni.

Tsabane appeared in the Benoni Magistrate’s Court on Monday 24 November 2020.

Handing down the ruling, Acting Judge Herman Broodwyk sentenced Tsabane to 25 years for murder of the toddler who was left in her care and five years for defeating the ends of justice.

The one-year-old toddler’s lifeless body was found inside the storeroom at his home in October 2019, Tsabane told police that intruders entered the house, tried to rape her and forced her and the baby to ingest poison.

She further stated that the intruders fled with the baby.

Post-mortem results revealed that Langelihle had been suffocated and strangled to death.

A pathologist also revealed that there was no evidence of poisoning in the child’s system.

“Her version was not just only improbable but measured against certain objective facts such as the medical evidence as to the poisoning and the self- inflicted scratches, her version was nothing else but a pack of lies,”

“Looking at the merits and the demerits of all the witnesses, that her version cannot reasonably and possibly be true”, said Broodwyk.

Judge Broodwyk also found that the Far East Rand Hospital could not present medical evidence of her being poisoned in court.

The motive behind Langelihle’s killing has still not been established, however Judge Brookwyk said it matters not that the motive is still unknown, Tsabane was the only one in the house on the day that the toddler was murdered.

Langelihle’s emotional mother, Lerato Mnguni took the stand to plead with Tsabane to tell her what really happened the day her son was killed.

“I hope God will give her strength to give me a call one day and tell me what really happened,” said emotional Mnguni.

Previously Mnguni had stated that she is still baffled why Tsabane would kill her son because they had a good relationship while living and working for the family for a year.