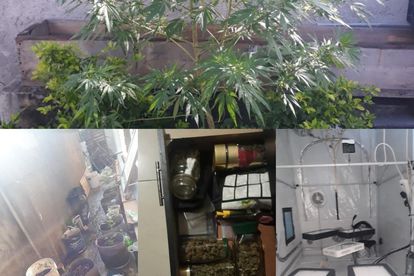 A 33-year-old male appeared in the Nelspruit Magistrates Court after being arrested for allegedly owning a dagga laboratory and manufacturing.

Julio Cohen was arrested by the Hawks Serious Organised Crime Investigation in Nelspruit for owning a drug laboratory and manufacturing thereof on Wednesday, 18 May 2022.

Police received information from a reliable source about a house in Nelspruit where drugs were manufactured.

According to Hawks spokesperson Captain Dineo Lucy Sekgotodi, a search and seizure warrant was authorised by the court and a disruptive operation was conducted.

“The suspect’s house was visited and a search was conducted. While searching the house, police found a room that was used as a laboratory to process dagga.”

The following equipment was found and seized by police:

Sekgotodi said inside the yard,  20 dagga trees, seven bottles, one paint bucket, and one Tupperware all containing dry dagga.

“The suspect is disabled and using a wheelchair. He was arrested and taken to court.”

Cohen was released on R1000 bail and the case is postponed to 4 July 2022 for further investigation.

MAN IN CUSTODY FOR MURDER AND ATTEMPTED CIT ROBBERY

Meanwhile, Solly Raph Sibiya (34) was remanded in custody by the Kabokweni Magistrate’s Court on Thursday 19 May 2022 for alleged murder and cash-in-transit attempted heist.

The suspect was arrested at Kabokweni by the Hawks team on Wednesday,18 May 2022 for unlawful possession of ammunition.

During the interview, he was linked to Kabokweni attempted robbery case.

It is alleged that on 16 April 2021 at about 10:37, the G4S Security guards stopped at Khumbula garage Kabokweni to collect money.

“The crew member went into the shop to collect the cash. The other crew member waited outside, suddenly he heard gunshots and saw between 12 to 15 suspects on the scene who fled when he shot back.

The driver of the armoured vehicle was fatally wounded and no cash was stolen during the incident.

The case was postponed to 27 May 2022 for a formal bail application.