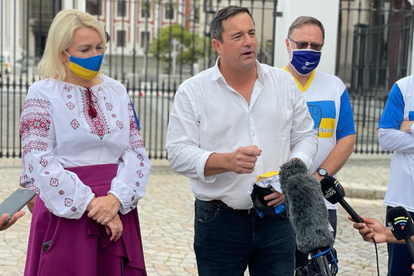 The Democratic Alliance leader, addressing the media outside of Parliament following the meeting, voiced the opposition party’s support for the Ukraine. Certainly, Steenhuisen condemned Russia, commenting that:

“We unequivocally condemn Russia’s illegal invasion of a sovereign state and the harmful position taken by National Government. The DA extends its support to Ukraine.”

Earlier, the opposition party had demanded that the South African government should take a stronger stance on the conflict. In a DA-led petition, which to date has garnered over 4 000 signatures, the party acknowledged the ‘long-term relationship with Russia’ through BRICS.

Nevertheless, the DA wants the ruling party to take a far stronger stance in attempting to encourage Russia’s withdrawal from the Ukraine.

“Are disappointed that South Africa are not taking a strong enough stance in trying to get Russia to withdraw from Ukraine in an effort to secure a swift peace.”

Furthermore, the DA warned President Cyril Ramaphosa and key Ministers that history won’t forget which side they opted to take amid the conflict.

“It is therefore the spirit of this petition that we call on President Cyril Ramaphosa, Minister of International Relations and Cooperation Naledi Pandor and our Ambassador to the UN to understand that their names will be attached to the votes and statements they make when history will judge us and we the undersigned petition them to take a tough and unambiguous stand to push for the immediate withdrawal of Russia.”

Parliament to hear debate on conflict

The opposition party has also celebrated being on the ‘right side of history’ after its bid to debate the invasion in the National Assembly.

“The DA is pleased to announce that the Speaker of the National Assembly has acceded to our request for an urgent debate of national importance on the impact of the Russian Federation’s invasion of Ukraine on South Africa. The DA will fight to get SA on the right side of history!”