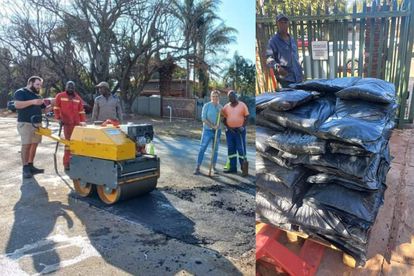 The DA has launched a community-based initiative to address the enormous number of potholes in Mokopane, Limpopo.

THE DA INVOLVES THE COMMUNITY TO FIX POTHOLES

In a statement, the DA said while the ANC-run Mogalakwena Municipality faces serious financial constraints and fails to deliver services, they and the community work together to get things done.

“This DA-led initiative is a unique collaboration between the community, where the community members sponsor the asphalt and identifies the areas which they wish to have repaired,” the party described the project.

It went on: “The materials are then purchased and delivered to the Municipality, where after municipal technicians do the necessary repairs in accordance with the prescribed standards”.

DA councillors work closely with the teams to ensure that the asphalt is utilised in the streets identified by the community.

THE EXTENT OF THE WORK DONE BY THE PARTY IN MOKOPANE

The DA said the Mogalakwena Municipal Roads Division has been supplied with 222 bags of asphalt, due to the generosity of the community and has fixed 70 potholes to date.

An additional 79 bags of asphalt will be delivered to continue to fill major potholes throughout town.

“This is another example of how the DA gets things done.”

Meanwhile, in Potchefstroom, a patriotic resident Dirk Venter, needs no community to get things done.

He has single-handedly fixed more than 2,500 potholes in the small North West town.

The 67-year-old, who takes the rubble dumped on the side of the road to fill the potholes, received heaps of praises for championing the issue of potholes in his community.

According to Arrive Alive, threats from potholes can be more severe than merely financial risk. “We have witnessed crash reports of even fatal crashes caused by head-on collisions directly related to potholes”.

Some of the vehicle damage includes: