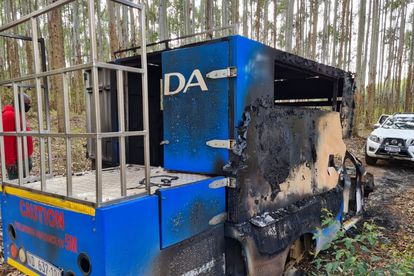 A DA vehicle was torched after two members were kidnapped by armed men in KZN on Monday. Photo: Supplied.

A DA vehicle was torched after two members were kidnapped by armed men in KZN on Monday. Photo: Supplied.

Two Democratic Alliance members were the victim of a horrific incident on Monday, with armed men having hijacked their DA campaign vehicle in KwaZulu-Natal before driving them 20km away and torching the vehicle.

Dean Macpherson, the DA’s Shadow Minister of Trade, Industry and Competition, confirmed to The South African that the incident took place shortly after the members – a councillor and staff member had wrapped up an event related to the party’s campaign trail in the province, and said that they endured a traumatic experience as their captors debated whether or not to kill them before opting to leave them in a field.

South African Police Service (SAPS) spokesperson Captain Nqobile Gwala said that a case of carjacking was opened for investigation by Richmond SAPS after the complainant was robbed of his vehicle on Monday.

“The vehicle was also stripped off the parts. The matter is still under investigation,” she added.

Macpherson said that the incident took place shortly after 21:00 on Monday 20 September, with the DA members returning from the event in a DA branded campaign vehicle. He said that his colleagues noticed a bakkie approaching them from behind with flashing blue lights, “similar to those used by police”. He said that before they could act on their suspicions, the vehicle had blocked them and a group of armed men defended on them.

“Five guys got out with firearms and drove them for about 20km, tied them up. They didn’t take any of their cell phones, they just torched the car and left them in a field,” said Macpherson.

The traumatic incident was made all the more terrifying by the DA members’ captures heard discussing whether or not to kill them.

“[The armed men] were talking about whether they should kill them, or burn them in the vehicle,” he said, adding that the KZN branch of the opposition party is making assistance available to them.

“I visited one of the members this morning and we’re there to support them,” he said.