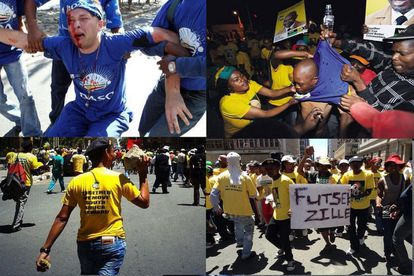 THE Democratic Alliance (DA) was forced to improvise around a planned march on ANC headquarters in Johannesburg, which had been aimed at demanding delivery on job creation promises set forth by the ruling ANC ahead of the 2009 elections.

The march had been prepared to raise awareness about the actual increase in the national unemployment rate since the last general elections and ahead of the 7 May 2014 polls. Despite promising the creation of 5 million jobs and renewing the promise for the upcoming election, South African unemployment under the ANC’s most recent legislative term effectively grew by 1,4 million.

One day before President Jacob Zuma’s state of the nation address, clashes between the ANC and the opposition DA in Johannesburg threatened to spiral into aggression, as ANC supporters appeared prepared to have the peaceful protest turn violent by arming themselves with bricks and petrol bombs while also using the protection of the Johannesburg Metro Police Department (JMPD) to pre-empt offensive action using tear-gas and rubber bullets.

Jessica Shelver, policy researcher for the DA, said: “It was scary. I’ve never felt like that before. They just came at us with petrol bombs. They had twice the number of people on us and they had the police on their side.”

Early in the morning, the ANC had managed to file an ‘urgent’ application at the Johannesburg High Court to have a protection order granted, leading to further security measures to be taken around the central Johannesburg protest site with the help of the Metro Police. The DA tried to prevent these measures by sending their own representatives to court, but only managed to hammer out a compromise, assuring the ANC that the protest would be confined to nearby Beyers Naude Square.

The ANC went on to call the court decision, negotiated out by Judge Phineas Mojapelo, a “victory for democracy”. DA leader Helen Zille’s spokesman Cameron Arendse, however, said, “We are disappointed that we were not granted the route.”

In the meantime, the ANC had also procured the services of a security consultancy firm to “protect its staff”, which was “armed to the teeth with batons, helmets, and shields,” according to ANC spokesman Jackson Mthembu. The ANC Youth League (ANCYL) was also present on location, having planned a human chain around Luthuli House to prevent the DA march from potentially entering the party’s headquarters.

â€œWe regard the planned DA march to the ANC headquarters as an act of provocation. The ANCYL will be out in full force to form a human chain and defend Luthuli House,” said ANCYL convenor Mzwandile Masina. With the ANC Youth League reportedly spilling out onto the streets in the course of the event and not remaining contained to the ANC headquarters site, questions about the legality of the ANC counter-demo have since been raised.

Arendse explained that the court-mediated decision to be kept off Luthuli House was pushed forward by the JMPD to protect ANC interests: “The ANC supporters just poured onto Sour Street while the police protected them. We were all marching peacefully, but the ANC came out and exposed its true colours today. It was a disgrace.”

Jessica Shelver added: “We know the ANC. We knew that they were going to be violent. But with all the media around, I did not expect this. Our march kept up with every single aspect of protocol, but their march was illegal. They had not even applied for it. We will be pressing charges against them.”

Reactions on the ANC side, however, resounded comparatively unimpressed by the day’s events. “I’m proudly excited to see that we still have that fighting spirit and we can do whatever it takes to defend and protect our movement,” said ANC supporter Aubrey Khanyisani, adding “ANC, I believe. Amandla!”

Despite isolated reports of escalations, tensions between the parties appeared to calm down to a manageable degree, once the decision had been taken to contain the final station of the DA protest to return to its starting point and not march all the way to Beyers Naude Square, one block away from Luthuli House. However, the clashes didn’t stop when the vuvuzelas had quietened down.

“On the way home, a bus with DA supporters from Rustenburg was attacked with stones and rocks. Other supporters were stripped of their DA shirts, and I heard of two people who suffered injuries,” said Jessica Shelver.

All things considered, the protest appears to have been kept fairly at bay but didn’t do any favours to the public image of an ailing ANC, which appears to only gang up support during such perceived publicity crises but faces fragmentation and growing isolation as Jacob Zuma’s leadership continues to be challenged.

A similar march organised by the DA two years ago to COSATU House had actually escalated into violence, leaving several partakers injured. The parties managed to avoid that kind of brutality, but without the confusion of violence in the air it may be easier for onlookers and audiences this time to choose between the aggressor and the victim.