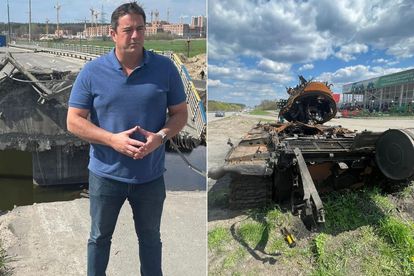 Democratic Alliance (DA) leader John Steenhuisen is on a six-day tour across parts of Ukraine. Steenhuisen’s ‘mission’ is to witness the impact of the Russian invasion within the country.

He believes that Ukraine is becoming the world’s ‘new frontier for freedom’. Taking to Twitter, the DA shared a video of Steenhuisen speaking about his travels in the capital city of the war-torn country.

“We have just arrived on the outskirts of Kyiv after spending the day travelling from Lviv. We are witnessing the destruction and so many civilians and the whole way down the road there were Russian tanks blowing up and destroying. These are the actions of the war raging here. It is a war for freedom. Ukraine has now become the new frontier for freedom in the world – rising up against tyranny and imperialism. It’s important that the world, particularly in Africa we understand the impact of this on our continent and as South Africans,”

DA leader slams criticism of visit to the war-torn country

The DA leader is facing backlash for making his way to Ukraine. He has described the ongoing criticism of his visit as ‘unfair and immature’. Steenhuisen says that politics is not one-dimensional. He added that it is important to focus on a number of issues.

Many social media users have voiced their concerns about Steenhuisen’s six-day tour. Locals believe that the opposition party’s financial resources should be used in South Africa.

DA Leader John Steenhuisen has slammed critics of his trip to war-torn Ukraine as “one-dimensional”, saying that the destruction and violence he is currently seeing up close and personal is going to have a major impact on South Africa’s food security and cost of living.

Steenhuisen embarked on a six-day tour of various regions of Ukraine this week, and told The South African on Tuesday morning that at the core of foreign policy and peace-making efforts is first-hand experience.  Read the full story here.