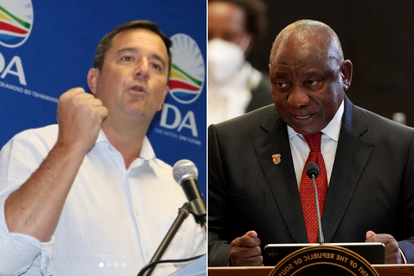 The African National Congress (ANC) has hit back at the Democratic Alliance (DA) for approaching the US Federal Bureau of Investigation (FBI) over the alleged theft of $4 million at President Cyril Ramaphosa’s Phala Phala farm.

On Tuesday, DA leader, John Steenhuisen confirmed that the US crime agency had been contacted by his office, with a request to investigate the alleged criminal activity that took place on Phala Phala farm.

The DA has been vocal about the Phala Phala farm saga and it looks like they won’t be letting Ramaphosa off the hook so easily.

“I’ve written to the FBI, requesting that they investigate allegations of money laundering by President Ramaphosa. They must investigate the source of the funds, and determine if the money is in South Africa legally. A cash transaction in SA involving $4 million is deeply suspicious.”

ANC HITS BACK AT DA

The ANC  said it is clear that the DA has greater sensationalist headlines than in the due process.

Mabe said it is bizarre that the DA has sought to involve an agency of a foreign state in the investigation of events alleged to have taken place on South African soil.

“It is unfortunate that the DA has demonstrated such contempt for South Africa’s laws and institutions at a time when great progress is being made under the leadership of the ANC to restore its credibility, capability and integrity of the country’s law enforcement agencies.

“The ANC reiterates its position that the criminal complaint against President Ramaphosa needs to be thoroughly investigated without fear or favour, and that the due process of law must be allowed to take its course.”