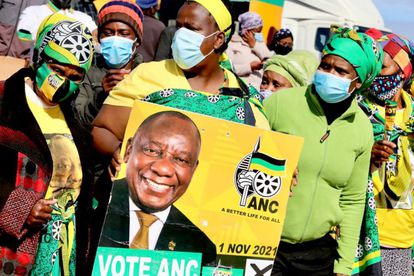 Election season is full of enough drama already without a global pandemic. And it seems President Cyril Ramaphosa campaigning with the ANC in Gqeberha in Nelson Mandela Bay today, is happy to start some more. To be fair though, he does have to put up with A LOT of jabs thrown his way from both the DA and EFF.

While speaking to community members in the area today, Ramaphosa came across two women wearing DA t-shirts. He quickly went on to hand them ANC replacements…

Once the women put on their new ANC t-shirts, Ramaphosa then joked that they should use the blue ones as “washcloths”.

Ramaphosa continued to fire shots at the DA and their governance in the metro, as he addressed crowds of ANC supporters.
According to Ramaphosa, the DA has failed to deliver for the people of Nelson Mandela Bay.

If you take Ramaphosa’s word, the ANC stands a good chance of reclaiming Nelson Mandela Bay from the DA. While that might sound like an ambitious task, we’ll find out in the days after the polls close on November 1st. Even if the DA can get over the finish line, wading through the murky waters of coalition politics in the metro, is still a very tough ask.