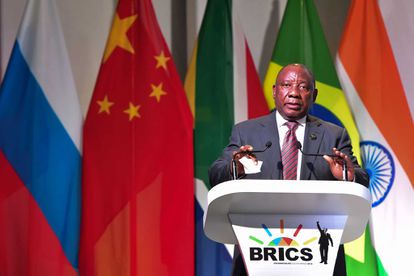 President Cyril Ramaphosa addressing the BRICS Business Forum at the Sandton Convention Centre in Johannesburg. 25/07/2018 GCIS The Business Forum deliberated on the global political economy and its implications for BRICS member countries, the implications of the fourth industrial revolution on inclusive growth and transformation, facilitating intra-BRICS trade, as well as fostering BRICS-Africa partnerships.

President Cyril Ramaphosa addressing the BRICS Business Forum at the Sandton Convention Centre in Johannesburg. 25/07/2018 GCIS The Business Forum deliberated on the global political economy and its implications for BRICS member countries, the implications of the fourth industrial revolution on inclusive growth and transformation, facilitating intra-BRICS trade, as well as fostering BRICS-Africa partnerships.

President Cyril Ramaphosa will lead the South Africa delegation to the 11th BRICS Summit to be held in Brasilia, Brazil on Wednesday 13 and Thursday 14 November 2019.

The importance of the BRICS summit

According to the Political Bureau, BRICS is an association of five major emerging countries, made up of Brazil, Russia, India, China and South Africa-, which together represent about 42% of the global population, 23% of GDP, 30% of the territory and 18% of the global trade.

The 11th BRICS Summit is hosted by the Federative Republic of Brazil, as led by President Jair Bolsonaro, as the 2019 BRICS chair and is convened under the theme “Economic Growth for an Innovative Future.”

Brazil’s priorities for its 2019 chair-ship are innovation, fighting transnational crime, health and promoting trade and investment with a focus on infrastructure development and possible Public Private Partnerships.

Ramaphosa at the BRICS Summit

Presidential spokesperson Khusela Diko, said the summit will be preceded by the BRICS Business Forum where President Ramaphosa and other leaders will interact with the Business Council to strengthen and promote economic, trade, business and investment ties amongst the members.

She said South Africa’s membership of BRICS enables the country to employ additional and powerful tools in its fight to address the triple challenges of unemployment, poverty and inequality through increased trade, investment, tourism, capacity building, skills and technology transfers.

“These objectives are further realised through BRICS’ Financial Institutions like the New Development Bank (NDB) and the Africa Regional Centre (ARC). The Johannesburg-based ARC, notably, is playing a catalytic role in providing financial and project preparation support for infrastructure and sustainable development projects in South Africa and Africa.

At an Institutional Development level, South Africa derives crucial benefits through the Track II institutions such as the BRICS Business Council and the BRICS Think-Tank Council, as well as the creation of the BRICS Inter-Bank Cooperation Mechanism.

Furthermore, the establishment in 2016 of the BRICS STI (Science, Technology & Innovation) funding mechanism and framework programme, is an example of the vital support for capacity building, as well as skills and technology transfer,” Diko said.

Ramaphosa to ensure implementation from past summits

The President’s engagement is to contribute to the future direction of the Summit, to strengthen the relations and mutually beneficial cooperation across the four pillars of cooperation, particularly in intra-BRICS trade and investment, as well as to ensure the ongoing implementation of the outcomes of the 10th BRICS Summit hosted in South Africa in 2018.

The Summit will welcome the adoption of the Terms of Reference and Work Plan for the Advisory Group on the BRICS Partnership on the New Industrial Revolution (PartNIR), which is in line with South Africa’s theme of the Chair-ship in 2018, namely “BRICS in Africa: Collaboration for Inclusive Growth and Shared Prosperity in the 4th Industrial Revolution”.

South Africa has made concerted efforts to place the African Continent and the Global South on the agenda of BRICS and to harmonise policies adopted in regional and international fora with those pursued in BRICS, i.e. Africa’s Agenda 2063 and the 2030 Agenda for Sustainable Development.

Here’s who else will be attending the summit

Deputy President David Mabuza is also on a working visit out of the country.