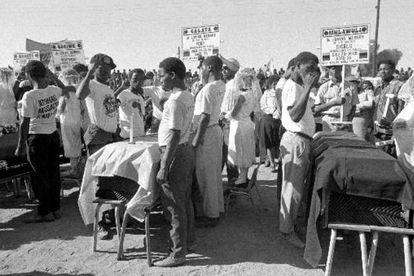 Following the death of F.W. de Klerk, apartheid’s last president, on Thursday, 11 November, the Fort Calata Foundation expressed its disappointment that the deceased took vital information about apartheid-era killings with him to the grave.

Fort Calata, Matthew Goniwe, Sparrow Mkonto and Sicelo Mhlauli – known as the Cradock Four – were killed by the apartheid security police near Gqeberha on 27 June 1985. Their bodies were burnt and dumped. The four anti-apartheid activists from the Eastern Cape were deemed a threat to the apartheid regime.

The apartheid government initially denied its involvement in the killing but later a top-secret military message that called for their assassination was leaked to the media.

The matter has still not been prosecuted.

“It is sad that, yet another apartheid criminal has died without having accounted for the crimes he helped to perpetrate against our humanity,” said Lukhanyo Calata, the spokesperson for the foundation and son of Fort Calata. “Maybe this is what the ANC and its successive governments post 1994 have wanted all along.”

“De Klerk takes to the grave information that we needed about deals that were entered into between former apartheid operatives and ANC leaders, who had betrayed us by entering into these agreements that have subsequently prevented the prosecution of apartheid criminals.”

In the statement, the Foundation claims de Klerk sat in on meetings of the State Security Council in which the fate of the Cradock Four was discussed between 1984 and 1985.

It adds that de Klerk ordered the Northcrest raid in Mthatha in 1993 that led to the deaths of five children, including the Mpendulo twins, who were murdered in their sleep.

The Foundation called on the National Prosecuting Authority to accelerate the prosecution of TRC cases before more individuals implicated in apartheid crimes die without being held accountable.

WILL THE NPA PROSECUTE?

One such case – the COSAS 4 bombing in 1982 – only made it to court recently. Thlomedi Ephraim Mfalapitsa, a former Askari, appeared before the Gauteng High Court for the fatal bombing of Eustice “Bimbo” Madikela, Ntshingo Mataboge (Matubane) and Fanyana Nhlapo, on 20 August 2021.

This is nearly 40 years after the incident took place. The bodies of the deceased were exhumed in September 2020 and at the time the request was made the families accused the NPA of sitting on the case since it was handed to them by the TRC in 1999.

The Minister of Justice Ronald Lamola recently told the families of the Cradock Four that a decision on whether to prosecute those behind the murders would be made by 2 December.

“We have indicated through the policy that this process must be completed in a period of 3 years because it has already taken too long. In the matter of the Cradock Four there has been an agreement that the NPA needs to come up with a prosecution decision before the end of this year, December,” said Lamola at the inaugural Fort Calata memorial lecture in Cradock on Friday, 5 November.