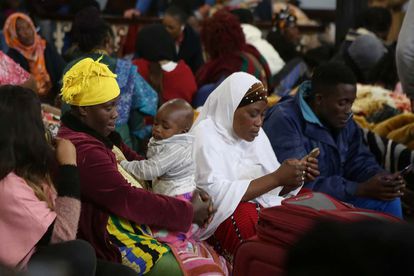 On Wednesday, 30 October 2019, asylum seekers were evicted from the Waldorf Arcade. Hundreds of refugees are now occupying the Central Methodist Church on Cape Town’s Greenmarket Square.

The church was overflowing with foreign nationals. The protestors ended up at the church after camping for around three weeks outside the offices of the United Nations High Commission for Refugees (UNHCR) in Cape Town.

Why were the refugees at the UNHCR offices

The asylum seekers were having a peaceful sit-in protest over their safety concerns in South Africa. Instead, police forcefully removed the protestors with water cannons and stun grenades.

The protestors were demanding to be moved to other countries because of the xenophobia in South Africa.

Refugees will continue to fight to leave SA

According to GroundUp, Jean Pierre Balous, from the Congo, addressed the crowd at the church as one of the leaders. He said:

“We want to thank our pastor and our church, who amongst all the churches in the CBD, decided to open the doors in order to accommodate the victims that were brutalised by the police of South Africa.

I was a target. If I’m standing here in front of you, that means God wants to save your lives. We will speak louder and clearer that the government of South Africa does not protect refugees.

We are not giving up our fight. And we will leave South Africa.”

Balous was also injured during Wednesday’s altercations with police. He revealed that he was still in pain after being dragged to a police truck before being taken to Cape Town Central Police Station.

“They took everyone’s cellphones, wallets. They impounded all the cars around. They took belongings, documents, everything.”

Balous shared how more than 50 refugees were kept in one cell and others were assaults behind bars. However, SAPS spokesperson Brigadier Novela Potwela denied the allegations.

She claimed that she was at the police station until 20:00 and witnessed asylum seekers being brought in, but no one was placed in a cell. Potwela said the asylum seekers were processed and then released.

UNHCR tells asylum seekers to go to their homes

In response to the situation, the UNHCR told the foreign nationals to return to their homes. In a statement, the organisation said:

“UNHCR appeals to refugees and asylum-seekers involved in the protests in Cape Town and Pretoria to respect the laws of the country. We also call upon them to return peacefully to their residences in South Africa. UNHCR and its partners stand ready to provide assistance to those in need.”

Collections organised for those in need

A collection for the refugees has been started by activists with items being dropped off at the old Woodstock Hospital or St. George’s Cathedral. Nadia Maria is one of the protestors who were forcibly removed from outside the UNHCR offices.

She explained how she and others were gathering the supplies they had to be able to eat. Maria also described the horrific incident that occurred when the police manhandled them and their children.