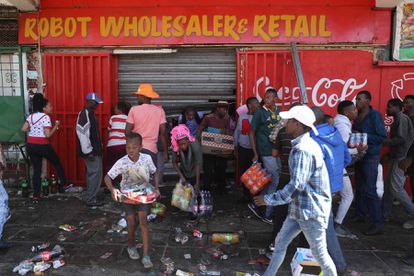 Looting in Turffontein during violence directed at foreign nationals that broke out in Johannesburg. Photo Thulani Mbele. 02/09/2019

Looting in Turffontein during violence directed at foreign nationals that broke out in Johannesburg. Photo Thulani Mbele. 02/09/2019

It has no doubt been a tough week for South Africa, mainly due to the riots that ripped through parts of KwaZulu-Natal and Gauteng. The unrest, which have since been labelled as an insurrection, made global headlines – but while focus was largely on the destruction and anarchy that had arisen, COVID-19 very much remained in the background, with cases growing by the day.

There are now concerns that the unrest could result in a spike in COVID-19 cases: Thousands of the rioters were seen doing little social distancing and not wearing masks (not disregarding the fact that gatherings themselves were also not allowed under Level 4 of the Lockdown). There are currently over 205 000 active cases of COVID-19, while more than 65 000 people have lost their lives to the respiratory disease.

Will SA see a spike in COVID-19 cases due to riots?

With Gauteng being the epicentre of the third wave of COVID-19 infections, the week-long riots could make the province’s battle with the pandemic even worse. But according to the National Institute for Communicable Diseases’ Professor Adrien Puren, there are some factors to consider.

“It’s a difficult question to answer. It’s not always that straightforward and it depends on the context in terms of people in close contact, although it’s in the outdoors where you do expect some level of movement. But again, if there’s close contact, loud voices and droplets spread, no mask-wearing, mingling – then yes, we may well see a surge in cases,” Professor Puren said.

According to Puren, the increase in COVID-19 cases can’t necessarily be attributed to the riots, particularly because those involved are not being tracked. He has also noted that another contributing factor to rising cases is the fact that many people who may need to go for testing are failing to do so at the appropriate time (and only test once it’s rather late)

“You can’t always ascribe that particular surge to those particular events. I think it’s very difficult because again, we’re not testing those individuals and we’re not tracking them either. So we can’t necessarily attribute these events that are happening to a surge in infections,” he said.