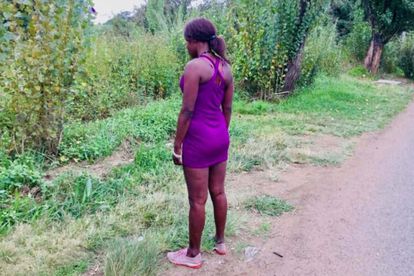 Sex workers in Springs claim they have endured beatings by police since the Covid-19 lockdown. Photo: Kimberly Mutandiro

Sex workers in Springs claim they have endured beatings by police since the Covid-19 lockdown. Photo: Kimberly Mutandiro

Female sex workers in Springs claim they have endured beatings by police since the lockdown. There are regular patrols by Metro police and SAPS along the avenues and at the Marikana spot, where sex workers are known to solicit.

The women say they hide and then reappear as soon as police are out of sight. They still get clients despite the national lockdown. They say their economic survival is of greater worry to them than contracting COVID-19.

Siphokazi*, a sex worker who is five-months pregnant, showed GroundUp bruises on her back. She said police beat her on the evening of the second day of lockdown by an officer who jumped from a police van and started beating people in the street with a sjambok.

“When I told him l was pregnant, he beat me once more before stopping and told me to go indoors,” she said.

She and two colleagues have been renting rooms at a guest lodge. Another colleague was arrested.

“We are not sure in which cell they are keeping our friend. Police should give us a break, really, because like everyone else we need to survive.”

Asanda also works from the Marikana spot. She said that all she has left at home was some mealie meal. “Hunger is killing us … My regular clients are not coming and police have arrested some ladies,” she said.

During the past five days of lockdown she had only managed to make R60.

“I am so broke and desperate right now, there is no way l will stay indoors. Police will have to kill me first if they want me indoors,” she said.

Ntombi, who also works there, said, “Much as l am afraid of COVID-19 … l have no choice; l need the money.”

Her home is in Germiston but she has been stuck in Springs since the lockdown.

However, for Siphesihle from Kwathema, it is almost business as usual. “l had to plan to make sure that l do not fall short of clients during lockdown,” she said. “I stay indoors at a friend’s in the avenues until clients call me. I only go out to meet clients.”

Spokesperson for Springs police Captain Johannes Ramphora said, “Generally everyone who is being non-compliant to the national call to stay at home during the lockdown is subject to arrest.

“Several people have been arrested over the past week and we can’t say that there is any way of telling whether a person is a sex worker and who is not.

“We have no statistics of people who have been arrested at this point, as most of them are being released through the court.”

On the issue of sex workers who claim to have been beaten up by police, Ramphora said they should report the assaults to the police station.

*All surnames withheld to protect the identity of the women.