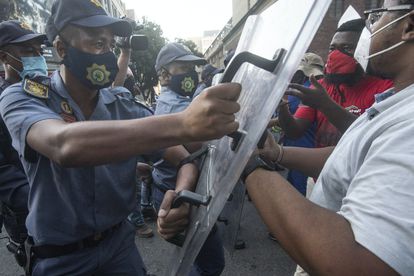 South Africa’s public order policing is as ill as it ever was. This has been illustrated in recent student protests spreading across the country’s campuses. In Johannesburg police shot dead a pedestrian at a protest outside the University of the Witwatersrand in Johannesburg.

In March 2020 the government imposed a ban on political gatherings as part of a host of Covid-19 lockdown interventions aimed at managing the COVID-19 pandemic. The move was unprecedented in the country’s post-apartheid history.

Since then there has been a distressing level of uneven and inconsistent policing of gatherings during the Covid-19 lockdown. The message this has sent is that the police were going easy on some gatherings, while taking tough action on others to suppress dissent.

As a scholar of the right to protest I have not been surprised by the heavy handed action. In my view the state has merely been reproducing behaviour patterns entrenched over the past two decades.

Research I conducted prior to the lockdown pointed to anti-democratic patterns of behaviour towards protesters. This is despite a 2018 Constitutional Court judgment in South Africa that affirmed people’s right to protest.

I concluded from my findings that much more needs to be done at municipal level to ensure that the judgment changes how the state regulates and polices protests. South Africa’s Regulation of Gatherings Act requires a convener to give notice of their intention to hold a gathering to their local authority, in most cases their municipality.

The Constitutional Court found in the Mlungwana and Others v S and Another judgment that a convener’s mere failure to give notice of an intention to hold a gathering should not be criminalised.

The court argued that criminalisation was an unjustifiable limitation on freedom of assembly. It argued that less restrictive means could be used to encourage notification, which it recognised served important public purposes.

The ruling covered all gatherings. But it was particularly significant for the right to protest. This is because protests are more susceptible to government repression than ordinary gatherings.

Using notification as a lens through which to view the state’s treatment of protests, I explored whether actual municipal practices on the ground were opening or closing spaces for protests, and what impact Mlungwana was likely to have on these practices.

I drew on two datasets, which provided rich detail about actual municipal practices over the past decade. The first was collected from 12 municipalities between 2012 and 2013 around the country by a team of researchers under my direction. The second was sourced from the South African History Archives. It had assisted a public interest law clinic to send access to information requests to all municipalities in the country where an information officer’s contact details could be found. Many municipalities simply ignored their requests.

The documents they obtained covered the period 2015 onwards.

I supplemented these datasets with interviews with municipalities, activists and lawyers.

The research results did not paint a flattering picture of municipal practices. Municipalities used pre-emptive restrictions on gatherings, and especially protests, as a matter of course.

For example, municipalities impose onerous conditions that are not required by, or even supported by, the Act. Some require conveners to pay fees to hold a gathering.

In addition, the Act should regulate gatherings in a content-neutral manner with the narrowest prohibitions possible on harmful forms of expression. Yet, there was evidence of municipalities interfering in the lawful expressive content of protests.

In one municipality conveners had to provide information about whether placards would be displayed in gatherings, the names and copies of the identity documents of people who were going to give speeches at the gathering, as well as the duration of the speeches.

These requirements risk chilling freedom of expression in gatherings as speakers may be unwilling to be identified in advance out of fear that their speeches may make them targets for harassment or intimidation.

The datasets revealed that municipalities held preparatory meetings for most gatherings they’d received notices about. This is in spite of the fact that in terms of the Act, meetings are needed only if the responsible officer has concerns about the gathering.

My research showed that outright prohibitions or refusals of requests for gatherings were a rarity. However, municipalities have also been known to impose blanket prohibitions on gatherings during special events – such as around the time of the 2010 football World Cup and, more recently, the 2016 local government elections – effectively suspending the right to gather in public spaces outside of a State of Emergency.

Municipal over-regulation of protests, coupled with over-policing, suggests a doctrinal shift in how they are viewed by the government. Instead of recognising protests as a democratic right and legitimate form of expression, increasingly protests have been framed as threats to domestic stability and, consequently, national security.

For example, I found no evidence from my research that the national government stepped in to curb abuses.

This shift is not confined to South Africa. It reflects a more conflictual global social order, declining respect for democracy as a political form, and consequently increasingly common framings of protests as riots and protesters as mobs.

State conduct during the lockdown has been yet another sign of this doctrinal decline.

Mlungwana was an important step towards reforming the problematic notification process. But, unless the judgment is followed by a deeper and more consistent ideological and doctrinal commitment to respecting the right to protest and ensuring a more genuine incorporation of the majority of South Africans into the political system, then the changes are likely to be limited.