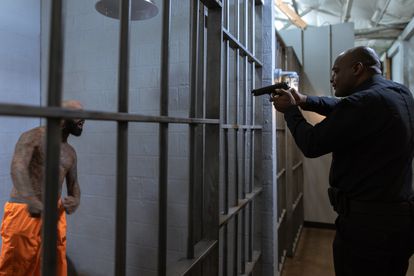 A Policeman Pointing a Gun to the Prisoner
Photo: PEXELS / RODNAE Productions

A Policeman Pointing a Gun to the Prisoner
Photo: PEXELS / RODNAE Productions

A Dutch court Wednesday sentenced 11 suspects to between one and nine years for maintaining an “underworld prison” with a torture chamber, hidden in shipping containers in a case that shocked the Netherlands.

The case revolved around seven containers found by police almost two years ago in a southern Dutch forest, after getting information from a huge hack of the European-wide EncroChat encrypted phone system, popular with criminal gangs.

During a police raid, one of the containers was found kitted out with a dentist’s chair, along with gruesome equipment including pruning shears, a saw, scalpels and pliers. The other six containers were set up to be prison cells.

“The court found that the suspects all contributed to a plan to kidnap, ransom, blackmail, torture and kill criminal opponents or their relatives,”

the Amsterdam District Court said in a statement.

AN ‘UNDERWORLD PRISON’ WITH A ‘TORTURE CHAMBER’

“The men formed a group based on a fight over money in the criminal world and planned to take the law into their own hands.”

“The lack of respect for the personal freedom and integrity of others is shocking,”

Dutch media named the chief suspect as Roger P., 50, who is known by his underworld name as “Piet Costa” — allegedly because he often travelled to Costa Rica.

Costa, who has already been sentenced to 15 years behind bars last month for cocaine trafficking, was handed an additional 33-month sentence.

Judges sentenced his 40-year-old right-hand man to eight years. Nine others were also sentenced and one man was acquitted.

Dutch police discovered the prison complex after hacking the EncroChat encrypted system in 2020 and judges ruled that evidence gleaned from the system was admissible in court.

The criminals sent chat messages via EncroChat, including saying “we must have enough belts and tie-wraps to tie them” and “we need cutting pliers for fingers and toes.”