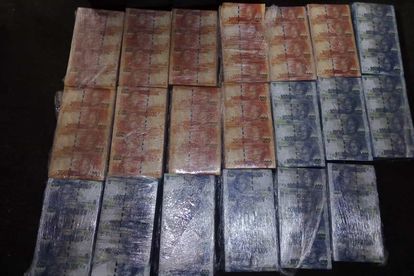 Police in Pretoria West say they have seized a large quantity of counterfeit cash after following up on information about two suspicious men at a local guest house.

When officers went to the men’s room they found more than R2-million in fake R100 and R200 notes.

One of the people involved was arrested on the scene, while the second person managed to escape and is still being sought.

The arrested suspect has been charged with being in possession of counterfeit money and is scheduled to appear in the Pretoria Magistrate’s Court tomorrow.

In February this year, a 28-year-old Johannesburg woman, Temwa Lisa Masoka, was sentenced to an effective six years in prison after a Mpumalanga regional court found her guilty of peddling counterfeit money in Mpumalanga and Gauteng. Her accomplice, Andrew Hopkins Mzaliwa, 56, escaped with a suspended sentence.

The pair were involved in the selling and distribution of around R300 000 in counterfeit SA rands, as well as Euros and US dollars. Part of their plan involved scamming foreign tourists.

No comparison to European bust

But all of our local counterfeit arrests and seizures pale into insignificance compared to the operation mounted in July this year by Europol, the European Union’s police co-ordinating agency.

In the culmination of a three-year investigation, law enforcement agencies from Italy, Belgium and France, supported by Europol’s own officers, swooped on an organised crime network believed to have produced a remarkable €233-million – the equivalent of R4.5-billion – in forged banknotes.

The mastermind behind the criminal organisation had apparently been involved in currency counterfeiting for more than 20 years and used large and sophisticated printing presses to produce the fake cash.

The organisation also had links to the Camorra, an Italian Mafia-type criminal organisation and secret society dating back to the 17th century.

Italy was the centre of the operation and, as part of the asset-recovery process police in that country confiscated 50 apartments, eight business premises, two farms, 10 companies operating in various sectors, 12 vehicles, one luxury boat and the contents of 22 bank accounts.

A total of 44 people were arrested and it is believed to be the largest counterfeit ring since the Euro was introduced as a currency in 1999.