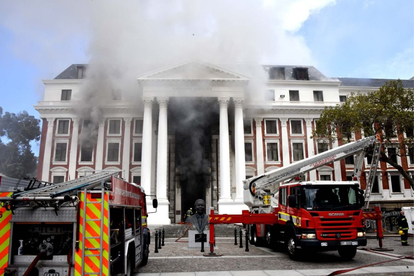 Parliament isn’t insured which leaves the repair bill up to the government and the South African taxpayer. Image: Parliament / Twitter

Parliament isn’t insured which leaves the repair bill up to the government and the South African taxpayer. Image: Parliament / Twitter

South African taxpayers could end up fitting the immense bill after a fire devastated large parts of the Parliament buildings. The houses of Parliament are not insured leaving the immense costs of repairing and rebuilding the historical buildings up to the taxpayer.

Public works acting director-general Imtiaz Fazel recently told Parliamentary chiefs and the leaders of political parties that the bill is set to be over R220 million. The damage to the buildings affected by the fire that took three days for Cape Town firefighters to extinguish may well reach costs as high as R1 billion.

The amount of R220 million excludes the cost of furniture, laptops, carpets, sound equipment and other damaged assets.

Fazel explained that the lack of insurance complies with a National Treasury regulation that each organ of state needs to absorb costs from damages and accident risks. Essentially, the government is solely responsible for the costs involved.

Interestingly, Parliamentary staff are not expected to work at the precinct. National Education, Health & Allied Workers’ Union (NEHAWU) instructed its members to avoid working at the site following the blaze.

Parliamentary spokesperson Moloto Mothapo says that NEHAWU’s instructions have been noted in a statement on the situation regarding employees at the site of the incident.

“Parliament wishes to state that, on 2 January 2022, the accounting officer of Parliament issued a communication to members of staff, informing them of restriction of access to the precincts of Parliament due to the fire incident, which has resulted in the cordoning off of affected buildings for reasons relating to safety, the investigation by law enforcement agencies and assessment by the Department of Public Works and Infrastructure’s multidisciplinary team of engineers,”

“Due to these restrictions, the physical presence of most staff members, with the exception of the management directly responsible for the management of the fire incident, is not expected until further notice.”